Here’s a slice of old Hollywood charm at its finest: a West Hollywood penthouse that was once home to Marilyn Monroe has just resurfaced on the market.

The actress, who rose to fame playing comedic “blonde bombshell” characters — which propelled her to become one of the most popular sex symbols of the 1950s and early 1960s — moved into the two-story penthouse in the mid-50s, at the height of her success.

From high-end hotels to small apartments and sprawling Spanish-style mansions, to a brief stint living in Frank Sinatra’s guest house, or taking an extended (and somewhat controversial) stay at Bing Crosby’s Rancho Mirage estate, Marilyn Monroe moved around quite a few times before settling on a place of her own.

In 1954, the Monkey Business actress moved into a two-level penthouse at the Granville Towers, which sources say was her final apartment before she bought her Brentwood estate — which was the only property Marilyn ever owned.

After splitting from her second husband, New York Yankees star Joe DiMaggio, Monroe moved into her seventh (and last) apartment in West Hollywood. For about a year, the model-actress set up residence in the luxurious condo that has just been listed for $2.49 million.

And Monroe may have not been the only famous “blonde bombshell” to live in the two-story apartment. A Los Angeles Times story from three years ago also identified Portia de Rossi as a former resident.

A stylish residence set in a star-studded building

Oozing old Hollywood charm, the posh penthouse is located in one of the most spectacular buildings in West Hollywood.

Located at the corner of Sunset Boulevard and Crescent Heights, the 2,032-square-foot apartment offers sweeping views of the city and mountains.

While the location is prime, the amenities are just as impressive. With a 24-hour doorman always on duty, the old Hollywood building includes a beautiful courtyard and garden, a clubhouse, outdoor pool and spa.

Marilyn was by no means to only high-profile celebrity to call the West Hollywood building home.

A celebrity favorite, Granville Towers has attracted many A-listers in its almost century-long existence. In recent years, celebrities like Nicole Scherzinger, Ashley Greene, Mickey Rourke, Brendan Fraser, or David Bowie have all lived in the posh building.

Listed by Amanda Lynn, Gina Michelle and George Ouzounian of The Agency, Marilyn Monroe’s former home is almost a collectible for die-hard fans of old Hollywood. 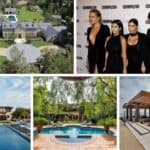 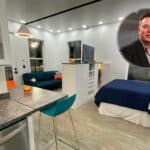