If there’s one thing we know about Jason Statham, it’s that the man has great taste. Whether we’re talking cars, suits, or women — as the Hobbs & Shaw actor has been in a committed relationship with Victoria’s Secret model Rosie Huntington-Whiteley for years, and the two share a son — Statham has proved times and times again that he holds beauty and style in high regard.

Naturally, his Los Angeles home — the latest in a series of houses the star bought and perfected, only to later sell at a profit — is no exception. And thanks to an extensive interview (and photo shoot) he gave to Architectural Digest, we now get to peek inside Jason Statham’s house in Los Angeles and get a better view of the actor’s sense of style. As it turns out, the action star is quite into mid-century design. Who would have thought?

Another surprising reveal was that Jason Statham is quite the real estate flipper.  “I’m always looking for places to either renovate or to buy, to move up the ladder,” Statham told AD. “I’m constantly looking and trying to find the next project to be a part of.” And that’s how he stumbled upon the house he now owns on Rising Glen Road, in Los Angeles.

“This one sort of came out of the blue and had a certain charm. It was quite downtrodden and had been neglected, as most of these of midcenturies have.” So Statham bought the property, gutted it, and laid the grounds for extensive renovation that would take 18 months to complete.

He partnered with long-time collaborator, architect Jeff Allsbrook of Standard Architecture, to work on a plan that would keep most of the exterior of the home intact, while upgrading the interiors to modern standards, and taking advantage of the abundant light flowing through the living spaces.

To highlight the beauty of the home, Jason Statham commissioned interior designer Courtney Applebaum to create a neutral palette of whites and earth tones, with texture in the form of leather couches and chairs, and sturdy wood tables and desks.

One central aspect when outfitting the home was to make it perfect for training and working out. The action star needed a reinforced ceiling, to hang heavy training bags and gymnastic rings, and a barrel sauna outside.

But Statham didn’t stop at that. He had the barrel sauna fitted with an a Hoshiazaki ice maker and stainless-steel immersion tub — for him to take his ice baths, a training form Statham swears by.

And while the property doesn’t serve as the action stars’ main residence, Jason Statham has been using it as a guest house for all of his U.K.-based friends and family. Pretty sure they appreciate the light-filled lodging, as that’s one of the aspects that first drew Jason Statham in:

“In the U.K., everything is just these tiny rooms with a fireplace. Every house looks the same—they’re all red brick—and they’re very different to California midcentury architecture,” he said. “So, [here] when you get floor-to-ceiling glass and it connects the indoors with the outdoors, it’s almost like this free-flowing connection. There’s just something very Zen-like, and it gives you a certain sense of relaxation.”

To get a better sense of how Jason Statham and Rosie Huntington-Whiteley live, check the video below, with Rosie giving Vogue a tour. Though it’s worth noting that Statham, as the prolific house flipper that he is, has since sold that house too, for $18.5 million. 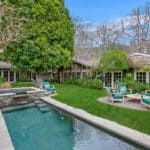