It’s hard not to love Neil Patrick Harris. Whether he’s onscreen, suited up as Barney Stinson in How I Met Your Mother, on stage, hosting the Tony Awards or simply being himself, the man is a bringer of joy.

Ever since he met his better half, David Burtka, and the two welcomed twins Harper and Gideon, Harris never misses a chance to put their adorable family on display. The holidays are particularly fun for the family of four, as both Harris and Burtka tend to go all out.

If you’re following either of them on social media, you probably know they take Halloween very seriously. They love decorations and go all out on crazy costumes, and this year the couple is showing us that they also have the skills to create magic for the holidays. And the way they’ve decorated their home for Christmas is… wait for it… Legendary!

In 2016, Harris and his husband welcomed Architectural Digest for the first time inside their renovated brownstone in Harlem, New York. The couple that renovates together, stays together, they say, and here are NPH and Burka three years later, opening their door to AD for the second time around. This time, to showcase their beautiful home in its finest Christmas suit.

Soon after wrapping up the show finale for How I Met Your Mother, Neil Patrick Harris and his entire family packed up their bags and left California for New York, the place where the Harris and Burka first met ten years prior.

Here, their Harlem brownstone was waiting, after undergoing an extensive 14-month renovation. The couple had bought the five-story, late-19th-century townhouse in the fall of 2013, then commissioned L.A.–based interior designer Trace Lehnhoff and New York architect Jeffery Povero to restore the property.

And restore they did, as the home — previously a bed-and-breakfast — is now an elegantly furnished single family home with a dramatically reconfigured kitchen, made to suit Burka’s particular tastes.

The house has really tall ceilings, so for the parlor where they usually welcome guests, they chose a giant tree. This is the “formal” and fancier tree that everyone gets to see.

The couple teamed up with Balsam Hill who helped them with all the holiday decorations. And while the gold-and-white ornaments were carefully chosen to complete the desired look, the couple kept it personal by including some items handcrafted by their children.

“We’ve been together for over 15 years, which is a lot of holidays. And every holiday you wind up buying a throw pillow, a new Nutcracker, or something. And we’ve kept it all.”

In fact, the whole house incorporates memories of their family, with photos and souvenirs they’ve collected over the years lining the walls of NPH’s home, now beautifully accentuated by the holiday decor.

While he loves art and expensive décor, Neil Patrick Harris is more pragmatic than his partner.

“You have to weigh the value of things when you have two dogs who slobber and two kids who love to finger-paint. The top half of the walls is where we put everything that’s valuable.”

For the actual tree, NPH and Burka say that in the last few years they opted for an artificial tree, since it’s easier to find one that’s just the right size. Plus that way, they no longer have to worry about finding tree needles around the house even in the middle of the summer.

Merry all the way

Neil Patrick Harris’ house looks stunning, and not only during the holidays. In the same space where they now the 12-foot Christmas tree now sits, there’s usually a player piano that connects to online music stations and you can see the actual keys being pressed to the tune.

And that’s not the only unique addition. As the couple loves having guests over to enjoy a good cocktail, they salvaged a bar from a Utica hotel that they’ve decorated with… monkeys (because, why not?)

They also have an apothecary cabinet filled with all sorts of prizes. Guests can pick a drawer and it’s like a game show – no one leaves empty-handed from Harris’ house. Besides, they can also sign the guest book placed on top of the cabinet.

We haven’t seen if there’s anything Christmassy inside Neil’s office, but we already know it’s magic since you have to press a little button on a poster to reveal the door that lets you go inside.

At the Harris-Burtka household, each room was appropriately decorated for the season. But there’s one room where Christmas mornings get the real family-time feeling, and that’s the upstairs living room.

Though it does hold an impressive art collection that includes works by Wiley and Banksy, the upstairs living room is a more relaxed space. Here, they have a second, less pretentious and more meaningful Christmas tree – the family tree.

The whole room is decorated with plenty of garland and ribbons, and of course, customized stockings. It’s the place where the twins find and open their presents on Christmas morning, while Burtka whips up something in the kitchen.

Both men have an exquisite eye for detail, and while a great Christmas décor takes quite some time, Neil rather enjoys the time spent putting it all together.

With such a wonderful setup, two Christmas trees, and a joyful family, we can only assume that the holidays were an extra special time in the Neil Patrick Harris household. 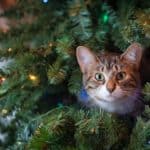 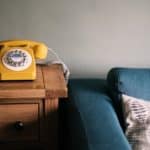