What better way to take your morning coffee than with the whole Seattle skyline at your feet?

1241 Bigelow Ave has many things working for it: a beautiful nickname (the property is lovingly referred to as The Song House, scroll down to find out why), a fabulous location (the affluent Queen Anne neighborhood, set northwest of downtown Seattle), scenic skyline views, and an interior design to match. Not to mention some beautiful stories to add to its charm.

The property was once home to Kathi Goertzen, a beloved KOMO-TV news anchor and winner of five regional Emmy Awards, whose investigative pieces and news series have been highly praised throughout the years.

Kathi also made her mark on history by being the first U.S. female news reporter to report on the fall of the Berlin wall, but what many people remember her for is the bravery and openness she showed in the face of illness, not shying away from publicly documenting her journey and struggles — after being diagnosed with recurring meningiomas.

A Queen Anne High School graduate, Kathi Goertzen remained faithful to the area, setting roots at the 1241 Bigelow Ave N property, which she called home until passing away in 2012 after complications due to her long battles with the terrible disease.

What Kathi left behind — on top of a timeless legacy — was a beautiful home that the new owners wanted to truly make their own. And did so with the utmost grace and style.

The beauty in a name: The Song House hints at the Song Dynasty

The address of the property, 1241, reminds of the legacy of Chinese philosopher, politician, and writer of the Song dynasty, Zhu Xi. It was in the year 1241 that Emperor Lizong — the 14th emperor of the Song Dynasty — showed his unrelenting support for Zhu Xi’s teachings by placing a memorial tablet in the Confucian Temple, elevating him to Confucian sainthood.

Zhu Xi was the leading figure of the School of Principle and the most influential rationalist Neo-Confucian in China, often referred to as the second most influential thinker in Chinese history, after Confucius himself.

And I couldn’t imagine a more harmonious and elegant home to bear such a beautiful reference in its name. In fact, the address and significance attached to it was one of the things that attracted the current owners when they bought the property. 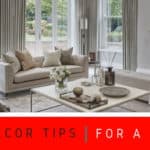