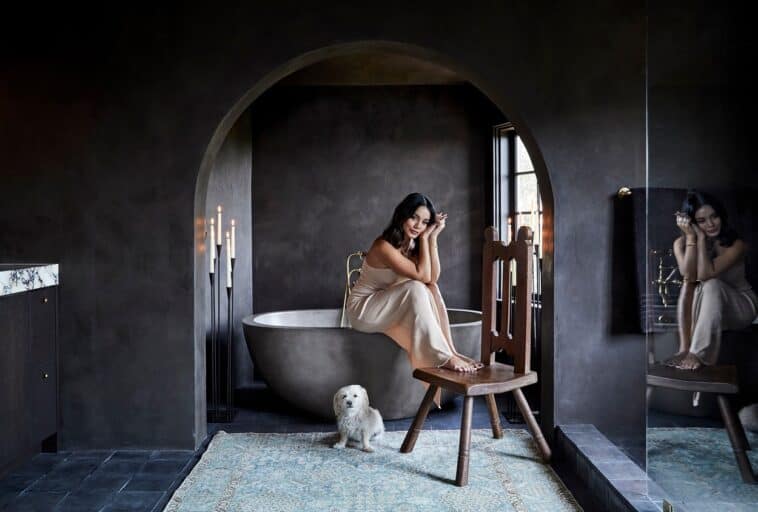 After searching for five years, Vanessa Hudgens found the perfect Georgian colonial estate in Los Feliz, Calif. to call home. Find out how the High School Musical star transported an old Hollywood home into her “French” and “vibey” dream house.

Nicknamed “The Little DeMille,” iconic Hollywood filmmaker Cecil B. DeMille built the stunning Los Feliz house for his mistress in 1922.

And now, the Princess Switch star, 32, is opening up the doors of the updated home to Architectural Digest for an exclusive tour.

From her DIY remodel in the kitchen, to her “obsession” with candlesticks and vintage books, to the “sexy” and “cave-like” bathroom, here’s the full scoop on Vanessa Hudgens’ luxe Los Angeles home.

An historic Hollywood home transformed into the perfect “escape”

According to Daily Mail, Hudgens purchased the luxurious Los Feliz home from Academy Award-winning actor Gary Oldman. After a 5-year house hunt, Hudgens bought the home in December 2018 for just under $5 million.

The 3,168 square foot Georgian colonial home retains many of its original features.

Sitting on a half-acre, the stunning estate includes three bedrooms and four bathrooms with a separate one-bed, one-bath guesthouse that sits over a detached two-car garage.

Nestled in the Hollywood Hills, the historic Los Feliz home provides the perfect escape for the Tick, Tick…Boom! actress.

“There were so many things about it that struck me,” Hudgens tells AD of her plush property.

She adds: “Walking through the gate and seeing this house covered in ivy, surrounded by olive trees, it was like I had been transported to France or Italy. It felt like such an escape.”

BFF to the rescue!

While Hudgens always “wanted an old home,” there’s no escaping the upkeep and renovations with an older building.

After purchasing the house three years ago, Hudgens enlisted the help of her High School Musical costar and good pal Ashley Tisdale.

“I got new marble, painted the cabinets, got new knobs and drawer pulls—I really wanted brass. My girlfriend Ashley Tisdale does interior design, and I got her advice on where to shop,” Hudgens says.

Hudgens also hired Jake Arnold to help bring her overall vision together, including a vast collection of vintage books, colorful art pieces, the perfect lighting for all her house plants, and a wide selection of candlesticks.

“I wanted it to be casual, relaxed and cozy,” she says of the interior design, adding, “I’m a big fan of candlesticks, so you will notice them everywhere.”

Amid the big plants, abstract art and witchy books, Hudgens couldn’t help but gush about the home’s fabulous floors.

“Oh and the floors!” she boasts.

The herringbone wood parquets “were a big selling point for me when I saw this house,” she shares.

Made from 18th-century French oak taken from an old chapel in Europe, the floors were originally added by Oldman.

Hudgens took on a pandemic project to improve her new home

Admitting that her kitchen looked “very different” when she moved in, the Powerless star remodeled it during the pandemic.

“I took it upon myself to have a project, and put it all together,” Hudgens says of the DIY project.

“I painted the cabinets, removed some cabinets, and put big oak beams for open shelving,” shares the actress.

Including eccentric wallpaper featuring mushrooms and dragons, Hudgens decorated the breakfast nook with designs from the House of Hackney.

“I figured, Why not? I did what I like to call a facelift to it,” Hudgens says of her kitchen renovations.

The funky wallpaper rests above a custom booth, inspired from “the dopest place ever.”

“I had the booth made for this space,” says Hudgens. “I was really inspired by the restaurant Maison Premiere, this absinthe and oyster bar in New York. It’s the dopest place ever.”

The actress also added extra tile, made of Carrara marble, from the primary bath for the backsplash.

A look at the romantic, the sexy and the cave-like features throughout the plush property

Hudgens invites fans into her “romantic” dining room, which features an Italian chandelier from 1stdibs.

Admitting she doesn’t cook often, Hudgens says, “I’m normally a ‘Let’s get everyone over, have a drink or two, put on a playlist, and then we all figure out what we want to eat and I just order it’ type of host.”

Heading upstairs, the Grease: Live star shows off her bedroom that features feminine art and pops of orange.

“For some reason I just really fell in love with the idea of orange for my bedroom,” she shares.

Hudgens is all about body-positivity, and shows fans a nude painting in her bedroom. “I wanted the house to be super feminine, to celebrate women’s bodies, to be a kind of femme palace,” Hudgens says.

When in California, enjoy the sunshine! The beautiful backyard features a pool, pizza oven, fire pit and plenty of outdoor space for entertaining.

“I wanted a yard that felt like a park where I could run around with my friends, have space to play, and just feel safe,” Hudgens shares.

Saving the best for last, Hudgens shows off her Goth black bathroom which is one of her “favorite places in the house.”

Featuring marble countertops, black walls and an egg-shaped tub, Hudgens went for a cave-like aesthetic in the primary bathroom.

“The bathroom is a sexy cave,” shares the actress.

See the luxurious LA home for yourself! From the ivy exterior, to the poolside murals, to the various Teen Choice Awards and the ghost-like painting of herself, check out the YouTube video for a full tour with the High School Musical star.

Zendaya Owns a $4 Million Home Fit for a Disney Princess
The Story of Taylor Swift’s Holiday House — Home to “the Last Great American Dynasty”
From a Prince to a King: A Look at Will Smith & Jada Pinkett Smith’s Real Estate Portfolio
Everything We Know About Adam Levine’s House in Los Angeles 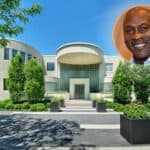 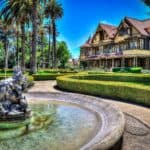