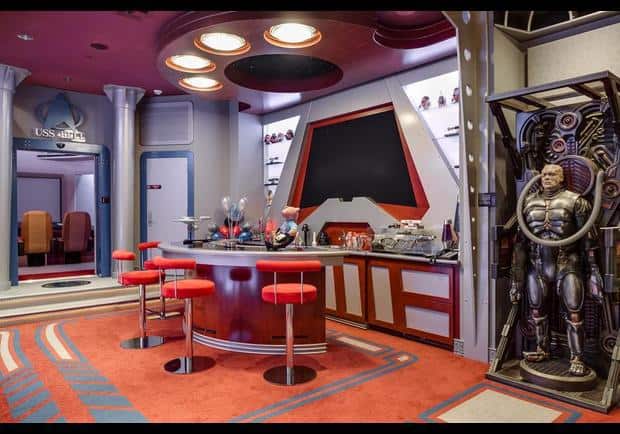 That’s the case of financier and entrepreneur Mark Bell, a die-hard Star Trek fan willing to spend over $1.5 million to turn fiction into reality — and the home theater of his Boca Raton, FL home into the USS Enterprise.

For those less versed in the world of space travel, the Enterprise is the spaceship featured on Star Trek: The Next Generation, a popular TV series that ran from 1987 to 1994, and a recurring feature in J.J. Abrams’ reboot of the popular classic.

According to the Wall Street Journal, Mr. Bell’s collection of Star Trek memorabilia—which he estimates to be valued at $1 million—includes original costumes, starship models used for special effects and the ears worn by Leonard Nimoy’s Spock character.

And while we applaud Mr. Bell’s passion — and taste when it comes to pop culture — it’s worth noting that a spread in the Wall Street Journal, well after the home has undergone the changes (photos show the home looking like this in March 2014) is a clear sign that the owner is simply creating buzz right before he re-lists the home.

Listed at the beginning of 2014, the home failed to sell despite having a stellar agent team — agent Senada Adzem of Douglas Elliman Florida was assisted by the New York-based power broker brothers Oren and Tal Alexander, also of Douglas Elliman.

The asking price may have had something to do with it: the home was listed for $35 million! — at the time making it the most expensive ever to hit the market in Boca Raton.

Just in case we’re right and the home is soon to hit the marker, here’s the brokerbabble before the broker gets to babble it: Bell’s Boca Raton home features eight bedrooms and 16 full and two half baths, as well as a ballroom.

Now, to make things interesting: the ballroom is equipped with 60-plus arcade games, including some that date back to the late 1970s.

And if that doesn’t hit the mark for nerds and gamers everywhere, know that there’s another playroom designed to look like you’re inside “Call of Duty”. Additional selling points: three full bars, a 1,500-bottle wine cellar, a library, gym and full outdoor basketball court. 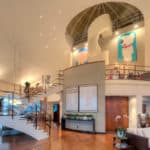 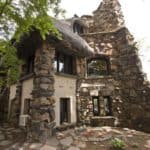