But there’s not much left to give away the property’s century-old history, as the home has been completely re-imagined by celebrated decorator and AD100 designer Brigette Romanek, who turned it into a light-filled refuge for the modern age.

With its modern take on classic 1920s California-Spanish architecture, the home was even featured by Architectural Digest soon after the revamp. Now, the Queens Road property is on the market with a $3,595,000 price tag and is listed for sale with The Agency’s Nikki Joel.

The West Hollywood home is owned by a creative, art-loving couple

The property is home to Kent Belden, CEO and founder of creative management firm The Only Agency (which offers styling for celebrities like Beyoncé, Anne Hathaway and Lady Gaga), and his husband, Louis Re, M.D.

Previously a former senior creative director for Epic Records, Belden has been dedicated to creating expressive images and is an avid art collector, which explains why the home is full of eye-grabbing art pieces and unique touches.

“I wanted it to be a completely modern take on classic 1920s California-Spanish architecture,” Belden told AD.

“The geometry of the house exudes old Hollywood glamour, the furnishings are modern European with a pop of 1970s rock and roll, and the kitchen is pure 21st century.”

Reimagined for the modern age by Brigette Romanek

To achieve his desired look, Belden turned to Brigette Romanek of Romanek Design Studio, one of Los Angeles’ buzziest designers and part of Architectural Digest’s AD 100 list — and a personal friend and frequent collaborator.

Known for her colorful, unconventional style, Romanek reimagined the 1925 Spanish colonial house for the modern age, inspired by the owners’ personality and style.

The 3 bedroom, 4 bath home is surrounded by greenery and invites plenty of natural light in through its many French doors.

It has an elegant formal dining room and living room with beamed vaulted ceilings and a wood-burning fireplace, and a chef’s kitchen with a breakfast bar and eat-in area that looks out to the beautiful backyard — where there’s a sparkling pool and spa, patio, and covered dining area beaming with old Hollywood glam.

Upstairs, the West Hollywood home has an elegant owner’s suite fitted with Romeo & Juliet balconies, an oversized dressing room and a spa-like bath with designer tiling and fixtures.

The rest of the beautifully appointed secondary bedrooms and bathrooms are also on this level, with an additional 1 bed, 1 bath accommodation set in separate guest quarters.

The house is steeped in Hollywood history

Like many of the century-old homes that line Los Angeles’ Queens Road, the beautiful Spanish villa has old Hollywood ties, having once been the home of silent film star Priscilla Bonner — known for portraying virginal, innocent heroines in movies like Charley’s Aunt (1925), 3 Bad Men (1926) and The False Alarm (1926).

The silent film starlet shared the home with her then-husband, Emmanuel Woolfan, M.D., but the property later fell into disrepair, until the current owners recognized its potential and invested into restoring it to its former glory.

Britney Spears’ house in Toluca Lake, fit for the Princess of Pop 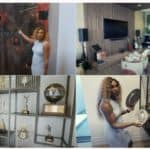 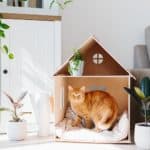