If you haven’t watched Parasite yet, this year’s Best Picture and Best Director winner at the Oscars, then stop reading right now and go watch it.

We guarantee you won’t regret it, and you’ll get a better understanding of why everyone seems weirdly fascinated by the house featured in the movie.

Bong Joon Ho, the director of the South Korean black comedy/thriller, built the luxurious Park family home from scratch. The fictional house, which is basically the main character in this movie, was designed by fictional architect Namgoong Hyunja, and it houses the wealthy and uptight Park family.

The plot of the movie is seriously twisted, and by the end of it, the house, which seemed like such a fresh, peaceful family home at first, turns really creepy. Let’s just say (spoiler alert) we wouldn’t want to live in a house with such a murder-y history.

Bong introduces us to the pristine glass house when Kim Ki-woo, aka Kevin, first visits the Park family home to interview for a tutor position for the Park daughter.

The housekeeper, Mun-Kwang, shows Kevin around proudly, as she’s been in this house from the very beginning, when the fictional architect used to live there. She knows a lot more about the house than she’s willing to tell, but more on that later.

The home of the Parks is undoubtedly a work of art, with large, floor-to-ceiling glass windows throughout, hardwood floors, perfect lighting and ultra-modern furniture and decor. That Namgoong Hyunja seems to know his stuff.

The house leaves Kevin in awe, which is not surprising, given that the beginning of the movie shows us how the working-class Kim family lives, in a semi-basement home on a slummy city street.

Their desperation in trying to make a living and afford basic things like food and wi-fi leads them to tricking the Park family, and the four family members all end up working at the Park house.

Things take a dark turn when it’s revealed that the previous housekeeper, which the Kim family had plotted to have fired, has been hiding her husband out in the house’s secret bunker for years.

Apparently, the fictional architect of the house hadn’t been too proud of that bunker, so the Park family didn’t even know about it. It was, however, the perfect hideout for Kun-sae, the husband, who was on the run from debt collectors.

The plot continues to thicken and get darker throughout the movie, culminating during a garden party thrown in the Park’s courtyard. The housekeeper’s husband, eager to revenge his wife, attacks the guests with a knife, and the sunlit, super-classy party turns into a grisly massacre.

Suddenly, the serene villa becomes a murder house, a home plagued by secrets and discrimination, and by this point, we’re kind of angry at it for deceiving us.

The house eventually finds new owners, but we imagine they weren’t exactly told all the details of what took place in their new home.

Building the ‘Parasite’ house from scratch

The house that Bong Joon Ho built was a complex project, as the director wanted everything in the house, from the furniture to the decor, to be top-notch and high-quality.

All the furniture was extremely expensive and custom-made by carpenter Bahk Jong Sun, in a way that reflects the movie’s theme of upstairs versus downstairs. In fact, there are stairs all over the place in this movie, and scenes constantly switch between levels, from the Kims’ basement house to the Parks’ secret bunker and above.

The meticulous care that the director took in designing the sets for ‘Parasite’ definitely paid off. There were plenty of Hollywood experts who reportedly couldn’t even tell that the house was not real. Even the slums where the Kim house is located were built from scratch, and they’re incredibly realistic.

Bong Joon Ho managed to build the most intricate and fascinating movie set in recent history, and each time you watch the movie, you find details that you hadn’t noticed before. So, we’ll stop here so you can go and (re)watch this incredible movie.

Frank Lloyd Wright’s Ennis House is So Much More Than Just ‘the Blade Runner House’
Rick Dalton’s House in “Once Upon a Time in… Hollywood”
Is it Real? The Futuristic, Secluded House in the Movie ‘Ex Machina’
John Wick’s House is Real – And Just as Complex as Our Favorite Badass Character 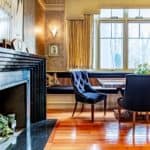 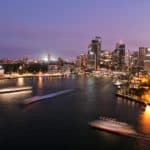