There’s no doubt that by now, everyone has seen the John Wick movies and is a big fan of the super-badass character played by Keanu Reeves. These action-packed Hollywood movies fit Reeves like a glove, so from now on we’ll all remember him as either Neo or the Baba Yaga.

Keanu Reeves and John Wick actually have a lot in common, if you think about it. First, they’re both badasses; one is a trained assassin and the other trains hard to be able to play a trained assassin. One is into vintage cars, while the other loves – and builds – motorcycles. Last but not least, they both love puppies.

Another thing that Reeves and his eponymous character have in common is the fact that they both treasure their privacy. However, John Wick also likes to splurge a bit, living in an architecturally stunning, remote house in Mill Neck, N.Y.

The first John Wick movie presents us with a broken, devastated main character that has lost all hope after the death of his wife. His secluded house by the lake enhances that feeling of loss and loneliness, and it only adds to the heartbreak because it looks like it would have been a beautiful family home.

The house comes alive again, even if just for a short time, when Daisy, an adorable little beagle puppy, is introduced into Wick’s life. Daisy’s fate, however, is too tragic, and we’re still not over it, so we’ll just leave it at that. For anybody who has ever had a pet, it’s perfectly understandable that Daisy’s death is the final straw that triggers Wick’s killer instincts, and all hell breaks loose as he looks to avenge his puppy.

Before the Wick house turns into a shooting range, we get a glimpse of the stunning interiors and carefully placed items around the house. The home is bathed in natural light and seems to blend with the exterior via the floor-to-ceiling windows that overlook the lake. Glass walls, however, make break-ins a little easier, as the movie shows us.

The interior is tasteful, modern and clean, with small details that remain open to interpretation. In one scene, we spot a carefully placed coffee table book on Alvaro Siza, a modernist Portugese architect who won the coveted Pritzker Prize in 1992.

Many have come up with their own theories regarding what the director was trying to convey through this subtle detail. We think Siza’s style of architecture is a perfect match to John Wick’s character. Pritzker Prize jury members stated that Siza’s shapes, ‘molded by light, have a deceptive simplicity about them; they are honest.’ Are you starting to connect the dots?

The jury explains further: ‘that simplicity, upon closer examination however, is revealed as great complexity. There is a subtle mastery underlying what appears to be natural creations. To paraphrase Siza’s own words, his is a response to a problem, a situation in transformation, in which he participates.’  If that’s not a perfect description of John Wick’s character, we don’t know what is.

The Wick House is Real, and It’s Just as Intriguing as the Main Character

Unfortunately, we don’t get to see much of John Wick’s house in the series, as the character’s life is turned upside down in the first few scenes of the first movie. So naturally, we’re intrigued. We want to know more about this house and maybe catch a glimpse of that driveway that housed Wick’s Ford Mustang Mach 1 — the car that basically started this whole thing.

As it turns out, the house is very much real, but the owners, much like Reeves and his John Wick character, like their privacy, so we don’t really know very much about it. We weren’t even able to find an exact address, but we do know it’s located at the end of Horseshoe Road in Mill Neck, N.Y.

Even from the outside, the house looks stunning in its simplicity, reminiscent of Alvaro Siza’s works. The inside does not disappoint, either, as we see in images presented by Narofsky Architecture/Ways2Design, which handled the project. According to their website, in 2009, the firm was tasked with reimagining and upgrading the original white stucco house built in 1971.

The home owners decided to keep the original structure instead of demolishing the house, even though it was in poor condition. Stuart Narofsky and his team repaired the remaining stucco facades and all new construction was sheathed in stucco to match the original materials.

The team carefully handled construction as to preserve the glazing areas and details, and modified the roof line to place more emphasis on the previously understated front entry.

A highlight of the Mill Neck house is the fact that it wraps around a courtyard on two sides, where the architects were careful to preserve the cherry and magnolia trees that it houses.

The Narofsky team also incorporated a new atrium space to attach to a new wing that would include a garage, a maid’s room, and a mudroom.

The owners of the property also decided to turn a second-floor, three-bedroom suite wing into a media and recreation room with stunning water views.

The John Wick house, as many call it, is so popular that it’s even made an appearance in the online video game Fortnite, in time for the release of John Wick: Parabellum, the third movie in the series.

You Can Stay in Tony Stark’s ‘Avengers: Endgame’ Cabin on Airbnb for $1,000/Night
Is it Real? Skyfall, James Bond’s Childhood Home in the Scottish Highlands
Rick Dalton’s House in “Once Upon a Time in… Hollywood”
The Suntouch House: the Bancrofts’ Palace in the Sky in Altered Carbon 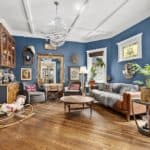 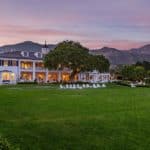