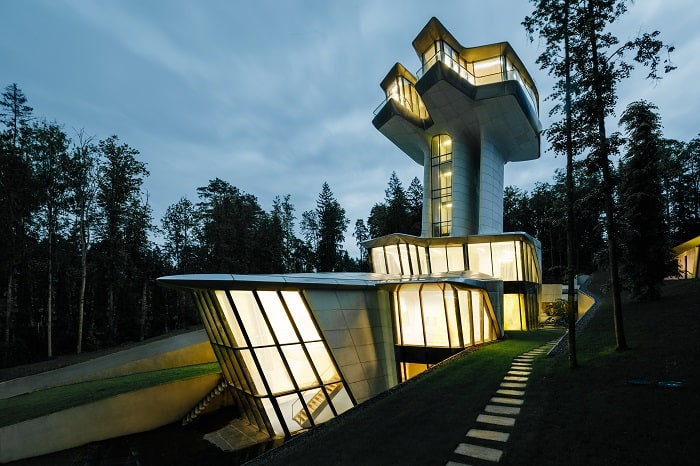 Visionary architect Zaha Hadid — known as the “Queen of the Curve” for the modern, curving designs of her buildings — had a legendary career. Her striking structures grace the skylines of major metropolitan cities, while her product designs, including furniture, jewelry, lighting, and even shoes, can be found in homes around the world.

She designed hundreds of award-winning buildings during her lifetime, from a metro station in Saudi Arabia, to the aquatics center for the 2012 London Olympics, to a city center in downtown Belgrade, all in her signature flowing style. The Iraqi-British architect left an indelible mark on the architectural landscape, building futuristic works of art such as Beijing’s Galaxy Soho, the Guangzhou Opera House, the One Thousand Museum in Miami, the Generali Tower in Milan, and many more.

But only one house.

The spaceship-like Capital Hill Residence in Russia is the only private residence ever to be built by Hadid, who regretfully passed away in 2016. And while Zaha Hadid never had the chance to see the house come to life, that’s all the more reason for us to take a moment and soak in the beauty of one of her final works.

Capital Hill Residence — the spaceship home born on a napkin

The incredible home, known as the ‘Capital Hill Residence,’ is located in a forested area in Barvikha, Russia and is the private home of Russian real estate magnate and philanthropist Vladislav Doronin.

When Vladislav Doronin first approached Zaha Hadid to design the house, he had one wish: “I want to wake up in the morning and just see blue sky.” To which Zaha Hadid said “You realize you have to be above the trees?” Doronin said “Yes.” So Zaha Hadid took a napkin and started drawing.

That was more than a decade ago. After their first meeting, Doronin knew he had found the architect who understood his vision for the unique home he wanted.

After facing a few hurdles along the way — Doronin first had a city lot in mind for the house, only to find that zoning restrictions wouldn’t let him build his dream home in Moscow — the Capital Hill Residence was finally unveiled in 2018.

Like many of Zaha Hadid’s structures, the spaceship-like home is defined by fluid geometries emerging from the landscape.

The house spans over four levels, with the living room, dining room, kitchen, and entertaining spaces being located on the first two floors, that also provide access to the indoor swimming pool, and leisure facilities.

Capital Hill Residence sits on a north-facing hillside and consists of two main parts – a lower area which sits among pine and birch trees — and an upper part which rises 72 feet above the ground to give its residents spectacular views of the Russian forested landscape.

Unlike any other of Zaha Hadid’s structures, which were almost exclusively set in urban environments, the Capital Hill Residence is a neo-futuristic building that stands out in the thick forest of trees it’s surrounded by. 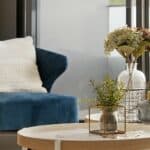 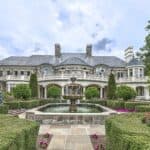