For the longest time, fans of YouTube’s cooking channel Binging With Babish didn’t even get to see Babish’s face.

Now, the creator behind the popular channel — Andrew Rea — is bearing it all out, and has invited Architectural Digest to tour his beautiful new house in Brooklyn (which doubles as his production studio), meet his girlfriend & their three cats, and get a sense of how the talented cook spends his personal time.

Rea, a first time homeowner, bought his house back in April 2020. He then commissioned Kyle O’Donnell of Gramercy Design to help him fine-tune the interiors.

Ironically, he was drawn to the designer’s work after watching a previous episode of Arch Digest’s Open Door featuring David Harbor’s NYC home, designed by O’Donnell in a light, Bohemian style that he wanted to replicate for his Brooklyn home.

The house has 6 levels, with the top four serving as living space and the lower two hosting the studio where the creator films his show.

The fully-equipped production studio on the lower levels is a highly familiar setting for Babish’s 8+ million YouTube subscribers, so we’re not going to focus all too much on it (though you can check it out in the video tour below), but rather take a closer look at Andrew Rea’s bright, light-filled and impeccably designed home.

The interiors have only recently been completed, with the level hosting the living room, kitchen, and dining room seeing a design overhaul right before the shooting of the AD video, but the results are spectacular.

The dining room leads into the living room — an inviting space with lots of greenery and plants framing the TV — which then opens up to a beautiful chef-worthy kitchen that also has a chic marble bar with an antique mirror.

Naturally, the kitchen features a bunch of elements that make a cook’s life easier — including a big kitchen island (with a sink that has a special faucet for filling pots with water) and a beautiful overhead pot rack to hold all of Babish’s personalized cookware.

As a side note for fellow fans: Rea will soon be releasing his cookware line, so if you love what you see, know that you will soon be able to equip your own kitchen with the Cooking with Babish-branded pots shown in the video.

The next level up is home to his girlfriend, Jess’ office (space that she shares with their three cats). The only other room on this level is Rea’s chillout space — a beautiful home theatre where he spends his free time watching movies and playing video games.

The Youtube creator admits to always having dreamt of having a home theater, which made it a natural choice for him to have one set up instead of a guest bedroom.

The third floor is where the master bedroom is located, featuring a brick accent wall, a king-size bed and lots of Frasier (Rea’s favorite TV show) memorabilia.

The bedroom leads into a wood-paneled walk-through closet that sits between the bedroom and the massive master bathroom. Moving on up to the last floor, we get to see the home gym, a bright and open space where Rea can work out the calories after indulging on his delicious dishes.

And just in case you were wondering where Babish gets his “grillin’ and chillin'” done, Rea gives us a tour of his backyard patio.

The wonderful outdoor space (which is quite generous for a New York City home) comes with lots of greenery, plenty of entertainment space, and a fire pit where you can’t have a fire.

Yes, you read that right; apparently, the previous owners set up the fire pit using concrete instead of fire-safe materials, which makes it a bad idea to light a fire inside. Luckily, Rea came up with a brilliant solution and added a grill inside, which he lights instead.

To be expected, he also has some of the best outdoor cooking gear here: Andrew Rea’s back patio is fully equipped with a gas grill, smoker and a pizza oven for when he wants to take his cooking outside. 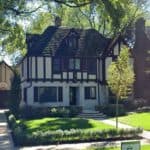 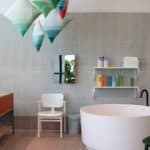