In the one-season show, the jaw-dropping mansion at 8408 Hillside Avenue in Los Angeles was the team’s most coveted listing, with each broker eyeing the $1.2 million commission that’d result from its sale. The season ends somewhat on a cliffhanger, as we don’t get to find out if anyone actually managed to make the sale and rake in the dough. Well, now we know.

The massive Hollywood Hills property just sold for $35.5 million, making it one of the biggest deals to close in the area.

The 20,058-square-foot property was co-listed by Jason Oppenheim of The Oppenheim Group, alongside David Parnes and James Harris of The Agency. You might recognize the Parnes – Harris broker duo from another real estate-related show, as the two have been featured on Million Dollar Listing Los Angeles.

8408 Hillside Avenue is reportedly one of the largest homes ever built in the Hollywood Hills, and the last project of this size to be built in the city — as the Los Angeles City Council voted to regulate the size of new homes in 2017.

The property manages to fit 5 bedrooms and 9 bathrooms in its 20,058 square feet, as well as a plethora of entertainment features and a stunning negative edge/infinity pool.

The interior of the house is equally impressive, with features like a 12-foot cascading waterfall, a car showroom, a night club, an executive office, game room and state-of-the-art theater.

But that’s not all; there’s also a spacious master bedroom that features an oversized walk-in dressing room that was brought in all the way from Lake Como in Italy.

Additionally, the 2018-built house incorporates a wellness center that has a sauna, a steam room, gym, massage area, as well as hot and cold plunge spas.

The highlight of this magnificent Hollywood Hills estate, however, is the 163-foot wraparound infinity pool.

Surrounded by lush vegetation and offering unmatched views of both mountains and ocean, it’s a one-of-a-kind, veritable private oasis right on the doorstep of one of the busiest urban cores in the world.

The poolside area also features a bar, a lounge with a fire pit, as well as a rooftop terrace, perfect for entertaining guests. Speaking of which, the property also comes with a detached garage and guest parking.

And while we don’t know who the new owner is, we’re pretty sure they will enjoy their massive new home, and all its perks. After all, they don’t make them like this anymore — at least not in the Hollywood Hills, the City Council says.

Fredrik Eklund is Looking for a Buyer for this $22.5M Gated Compound in Beverly Hills
This $26.5M Home in L.A. Comes with a Massive Star Wars-Themed Basement
You Can Now Buy Post Malone’s Beverly Hills Rental with a Wrap-around Pool that Overlooks the City
The Beverly House, where Jackie O & JFK Honeymooned and where Coppola Shot “The Godfather” Is No Easy Sell 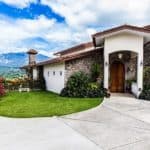 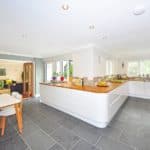