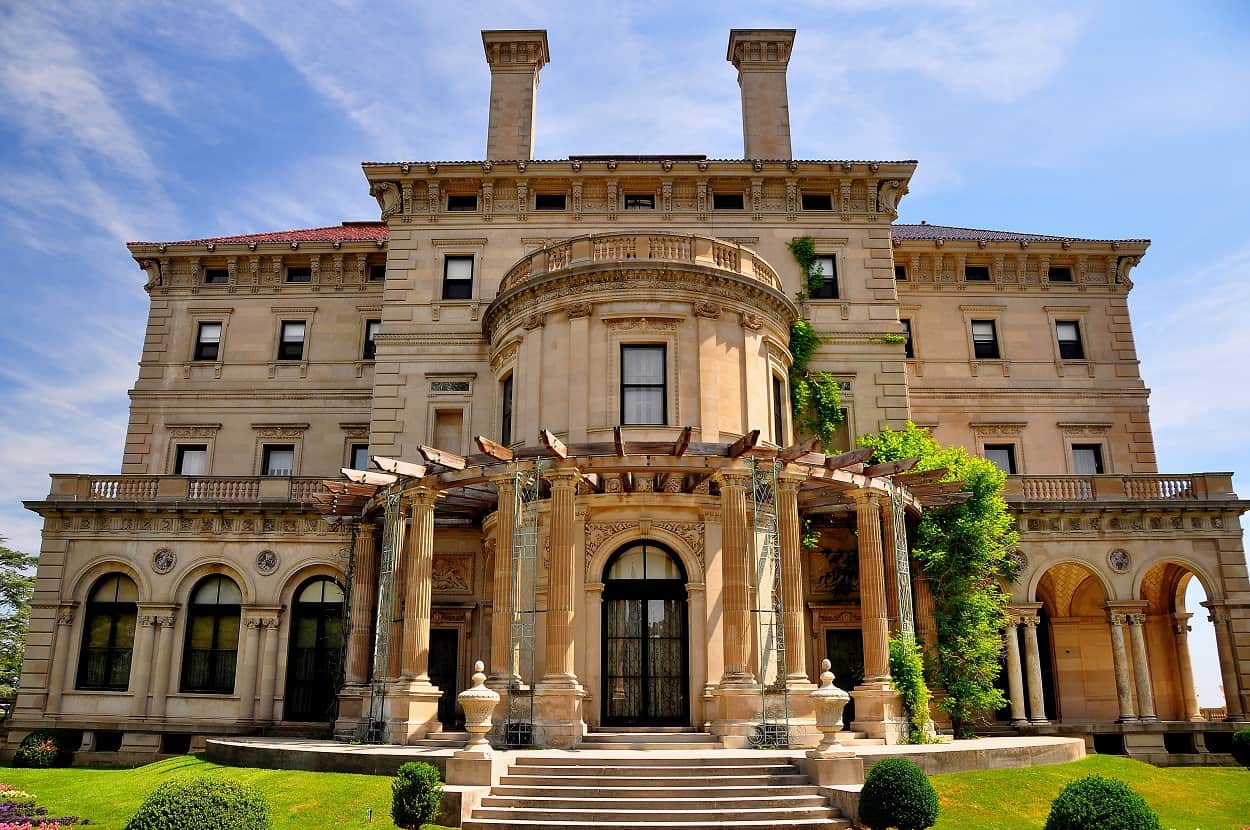 Gilded Age mansions are a living reminder of a time long past when America’s richest families — like the Astors, Vanderbilts, Carnegies, and Rockefellers — used their sprawling estates to assert status and give everyone a visual representation of their vast family fortune.

And nobody did it better than the Vanderbilt family.

The Vanderbilts were one of the nation’s wealthiest families, owing their fortune to Commodore Cornelius Vanderbilt, the 19th-century industrialist and railroad magnate.

A self-made man, Cornelius Vanderbilt (1794-1877) worked with his father as a boy, operating a boat that ferried cargo between Staten Island to Manhattan. He grew up to earn a fortune operating steamships, and then invested his earnings by buying railroads across the United States.

He started by acquiring the New York & Harlem Railroad in 1863; soon enough, he bought so many of them that he’s often credited with the achievement of single-handedly consolidating the railroad industry in the Eastern and Midwestern United States.

The Vanderbilt family legacy extends well beyond that.

Cornelius invested millions in building Grand Central Station in New York, and famously donated $1 million to Central University (which then became Vanderbilt University), with his descendants following in his steps, both business and philanthropy-wise.

William Henry Vanderbilt III was once the Governor of Rhode Island, Gertrude Vanderbilt Whitney used her inheritance to open the Whitney Museum of American Art, while Gloria Vanderbilt became a noted artist, designer, actress, and author.

The Vanderbilt star continues to shine bright in the public sphere, with Cornelius’s great, great, great-grandson, Anderson Cooper, who is a world-renowned journalist, author, and TV host.

But the Vanderbilt’s most long-lasting contribution comes in the form of spectacular Gilded Age mansions, historic properties that are as luxurious as they are grand and spread across tens of acres of land.

Among them, the most recognizable Vanderbilt homes are the Biltmore Estate in Asheville, NC (also known as America’s largest home and Richie Rich’s house in the ’90s movie), the Vanderbilt Mansion in Hyde Park, NY, the Marble House in Newport, RI, the Suffolk County Vanderbilt Museum in Centerport, NY, and the family’s iconic summer estate, the Breakers in Newport, Ri.

The Breakers mansion, a stately Beaux-Arts masterpiece that sits on a massive 13-acre estate, and fits 70 rooms in its imposing walls, is truly a home like no other.

And we’re here to walk you through the history of this national historic landmark.

History of the Breakers mansion: Part One

The original Breakers property was completed way back in 1878, and at the time, it was the crown jewel of Newport, Rhode Island.

Consisting of a Queen Anne-style cottage, the initial home was designed by architectural firm Peabody and Stearns for tobacco tycoon Pierre Lorillard IV.

It was built along the Cliff Walk on Ochre Point Avenue, set on a sprawling estate with jaw-dropping views of the ocean.

The stunning mansion was purchased by Cornelius Vanderbilt II in the fall of 1885, for a price tag of $400,000 — in the largest real estate deal ever signed in the area at the time.

Vanderbilt then rehired Peabody and Stearns to remodel the property, spending roughly $500,000 more in upgrades and renovations. That means the railroad tycoon invested the equivalent of $26 million dollars (by today’s money) in his Newport mansion.

Sadly, this investment was soon to go to waste, as the mansion was heavily damaged in an 1892 fire that started in the kitchen.

However, Vanderbilt wasn’t about to lose the property, and he soon undertook a redevelopment project that would rebuild The Breakers from the ashes – in a big, big way.

After his beautiful Newport summer house burned down in an unexpected fire, Cornelius Vanderbilt II wasted no time in gathering a team to rebuild the property.

He enlisted the help of renowned architect Richard Morris Hunt, who’s also responsible for the Biltmore Estate, to rebuild the Breakers at 44 Ochre Point Avenue.

The second, much bigger version of The Breakers was completed in 1895, and it was undoubtedly the most opulent and most impressive estate in Newport – again.

The lavish interiors were designed by Jules Allard and Sons and Ogden Codman, in a style reminiscent of French chateaux like The Versailles.

The design team used materials and pieces imported from Italy, France, and Africa, and the intricate details, rare woods, and mosaics were brought here from all around the world.

The new estate featured 62,482 square feet of living space across a total of 70 rooms, set on a sprawling 14-acre oceanfront lot. The opulent Gilded Age mansion is divided across five floors, and it’s easy to lose track of all the rooms in the house.

The basement level contained a laundry room and staff restrooms.

The second floor of the Breakers included separate bedrooms for Mr. and Mrs. Vanderbilt, their daughter Gertrude’s bedroom, Countess Szechenyi’s bedroom, as well as a guest room and an upper loggia.

The third floor offered additional staff bedrooms, as well as a sitting room designed by Ogden Codman in a style inspired by Louis XVI. Finally, The Breakers also featured an attic floor.

Pretty modest, right? The Vanderbilts’ penchant for opulence is what ultimately got family heirs in trouble in the 2000s.

Breaking ties with tradition: The Vanderbilt estate’s fate after the Commodore’s death

After Cornelius Vanderbilt II died in 1899 at age 55, he left The Breakers to his wife, Alice Gwynne Vanderbilt.

After she herself passed, her youngest daughter, Countess Gladys Szechenyi, inherited the Newport summer ‘cottage.’

Maintaining and upkeeping a property of this magnitude was no easy task, and Gladys soon found herself overwhelmed. She leased the property to The Preservation Society of Newport County in 1948, for a modicum of $1 per year.

Fast forward to 1972, and the society bought the property from Gladys’ daughter, Countess Sylvia Szápáry, for $365,000.

The deal included an agreement that Sylvia was granted life tenancy, and she continued to live at The Breakers until her death in 1998. The Society then agreed to allow her family to continue to live on the property’s third floor, which has remained closed off to the public.

The rest of the estate was preserved and opened to visitors as sort of a Gilded Age museum, and for many years, The Breakers was the most visited attraction in the area.

It was business as usual for the Vanderbilts and The Preservation Society for many years, with the two parties living in harmony.

That all changed when The Society came up with plans to build a new welcome center right on the garden, an idea that the Vanderbilts heavily opposed.

Despite protest from historians, neighborhood groups and Vanderbilt family members, the Newport Zoning Board approved the new welcome center in 2015.

The family took matters to the Supreme Court, but they had no luck, and plans moved forward with the project.

Things turned controversial in 2018, when news broke out that Gladys and Paul Szápáry, Countess Gladys Szechenyi’s heirs, were to vacate their 12,500-square-foot quarters on the third floor of the Breakers mansion.

The Society released a statement saying that the mansion’s outdated plumbing, electrical, and ventilation systems were no longer fit for residential use, and that this was endangering the entire structure.

Despite the fact that this was a joint statement by The Preservation Society and the Vanderbilts, a lot of experts weighed in to say that this move was merely payback for the family’s opposition to the welcome center.

Various concerns had been raised, not just from the family, that the modern structure didn’t belong on the historic grounds of The Breakers.

The Society had considered another site for the project, on land they owned right across the street, but decided instead to stick to the estate’s garden.

The Preservation Society moved on with the project, and the $5.5 million, 3,750-square-foot welcome center opened in June 2018.

The center includes ticketing stations, interactive screens showcasing the history of the estate, as well as bathrooms and a cafe.

We’re not going to take sides here. Maybe it’s not such a bad thing that century-old estates like The Breakers are brought up to modern standards. The grandest chateaux and palaces of the world have all taken this step.

However, in the words of Paul and Gladys Szápáry’s cousin Jamie Wade Comstock, ‘visitors will soon find that the gilded cage was much more interesting when it still had the birds inside it.’

Who owns the Breakers mansion in Newport RI?

The former Vanderbilt summer estate is now owned by The Preservation Society of Newport County, who bought it in 1972 for only $365,000.

Who lived in the Breakers Newport RI?

Cornelius Vanderbilt II purchased the property in the fall of 1885, and it served as his family’s summer home for almost a century. The last Vanderbilt descendants to call it home were Gladys and Paul Szápáry, who moved out in 2018.

Does anyone live in the Vanderbilt Mansion today?

While the sprawling estate and the Gilded Age mansion that anchors it are open to visitors, nobody currently lives on the property.

Can you visit the Vanderbilt summer estate?

Absolutely. The Breakers mansion is now a tourist destination welcoming visitors looking to explore the historic Vanderbilt summer “cottage”. It is open daily from 10 am to 5 pm, and offers both general admission and a family tour.

How big is the Breakers mansion?

Set on a sprawling 13-acre lot, the Breakers estate has an impressive total of 70 lavishly-furnished rooms spread across 60,0000+ square feet of living space.

When was it built?

The history of the Breakers dates back to 1878, when it was built for tobacco tycoon Pierre Lorillard IV. Not long after, Cornelius Vanderbilt II purchased it and had to rebuild it, as the house burned down in a fire in 1892.

What’s the address of the property?

More opulent mansions that stood the test of time 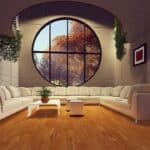 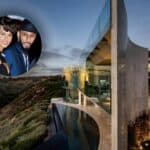