If you’re into witch culture and have long been obsessing about unique abodes like the Practical Magic house, you’re going to love the Spadena House.

Also known as the Witch’s House in Beverly Hills, the magnificently mystical home looks like it’s been plucked straight out of a fairytale — or a Hocus Pocus film set.

Located on the corner of Walden Drive and Carmelita Avenue, the storybook house was built in the early 1900s for a Hollywood silent film, then went on to become one of L.A.’s most recognizable private homes.

Continue reading all about the wonderfully witchy house that is now a landmark in the heart of Beverly Hills.

The history of the Spadena House

Originally built in 1921, the Spadena House was created as the offices and dressing rooms for Irvin Willat’s film studio in Culver City, Calif.

Willat was an American film director of the silent film era who directed 39 films between 1917 and 1937.

In 1926, the building was moved to its present location on the corner of Walden Drive and Carmelita Avenue in Beverly Hills and converted into a private home.

Just blocks from the glitz and glam of Rodeo Drive, the unique home features tiny whimsical windows and pointy, lopsided roofs, and an intentionally dilapidated design, making it one of L.A.’s most unique homes.

The whimsical structure is now ranked as one of the city’s best sights and historical landmarks, alongside other Beverly Hills staples like Mulholland Drive, Rodeo Drive, the historic Lily Pond, or the Greystone Mansion.

The Spadena House is a perfect example of storybook architecture

Creating a bewitching effect in Los Angeles, storybook architecture offered an exaggerated medieval style with many of the buildings designed with crooked walls and swayback roofs.

Inspired by the beauty of Europe’s cobblestone streets and ancient structures, this form of architecture included a wave of whimsical homes featuring dramatically different structural fads.

“The thing that makes this property important is it set the bar for storybook architecture in Los Angeles during the ’20s and ’30s,” Kimberly Reiss of Beverly Hills Heritage told CNN of the Witch’s House.

Described as the quintessential Hansel and Gretel house, the Spadena House was designed by Hollywood art director Harry Oliver who worked on more than 30 films between 1919 and 1938.

The designer of the Spadena House went on to play a major role in storybook architecture.

Some of Harry Oliver’s other designs include the original Van de Kamp Bakery windmill and Gold Gulch, the largest concession stand at the San Diego World’s Fair.

Is it too boo-tiful to live in?

Sure it’s spook-tacular, but does anyone actually live there?

Witch, please! The Spadena house has been inhabited since its move to the 90210, almost a century ago. The witch house’s first residents were the Spadena family, who lent the property their name.

In the 1960s, a second family moved in and renovated the interior, making some exterior alterations including adding a skylight visible from certain angles.

As it turns out, the new owners were not garden witches. They attempted to fill in the leaky moat, but once it hit the market again in 1997 it was a “sixties nightmare,” according to the realtor Michael Libow.

Although Libow showed the house to several potential buyers, the seller simply forbade a tear down. And before too long, Libow fell under the spell of the mystical home.

“I think it just hit me one day, and I thought, ‘You know what? Why not?'” Libow said about his decision to purchase the property.

He added: “Jump in; take a chance. I’m big on taking risks.” So he ended up buying the house for himself.

Over the next decade, Libow renovated and rebirthed the classic storybook home.

“It gives me great joy to be able to bring joy to people who stop by to look at it,” Libow said of the home, which is now a Beverly Hills landmark.

But don’t expect a grand tour, Libow actually lives in the house. “I’m told, [it’s] the most requested non-celebrity house to visit in Los Angeles,” he shared.

How much is the Beverly Hills witch house worth?

Realtor Michael Libow took the Spadena House off the market back in 1998 and has been living inside the whimsical property ever since.

In fact, Zillow estimates its value at over $7 million, with Redfin placing it in the $5 – $6 million range. And that isn’t all that surprising given the property’s enviable location and generous square footage.

Sitting on a 0.29-acre lot in prime Beverly Hills (and sporting a highly desirable 90210 zip code), the storybook house packs 3 bedrooms and 4 bathrooms between its slightly crooked walls and 3,982 square feet of living space.

Comparable properties in the area trade well above the $5 million mark — even without sporting a fairytale-like design.

In 1921, shortly after it was completed, the Witch’s House made its first on-screen appearance in the silent film The Face of the World.

Since then, the unique home hit the Hollywood big screen in 1995’s smash hit Clueless.

“It was strictly a background shot [with] Alicia Silverstone walking by the house,” said Libow. “But everybody respects the home for being in that movie.”

Not to mention, the home has its own TripAdvisor page.

“Great for pictures for the Halloween season,” writes a reviewer. 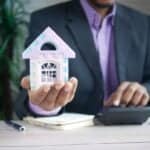 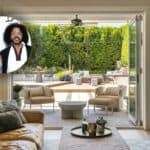