When we think of the New York City skyline, we conjure up images of famous skyscrapers and iconic buildings, from Empire State to the Chrysler or Flatiron Building.

But popular culture has added its own share of iconic high-rises to the mix, and one of the most memorable ones might just be the Avengers Tower.

So much so, that our minds might be tricked into believing that, when we’re visiting NYC, we just might get to choose whether to climb atop the Empire State Building and take in the magnificent view, or head up to The Avengers Tower and kick it with good ‘ol Thor and Iron Man.

Unfortunately, the fictional building doesn’t exist outside the comic books and the Marvel Cinematic Universe, and the same goes for our favorite superheroes.

However, the actual building that serves as the basis for the Avengers Tower does exist, and it’s the MetLife Building at 200 Park Avenue in Midtown Manhattan.

In the MCU, Tony Stark buys the MetLife Building, revamps the upper portion of it, and rebrands it as Stark Tower, which later ends up becoming the iconic Avengers Tower.

A brief history of the Avengers Tower: How did it come to life?

Before Nick Fury banded our favorite superheroes together and the six original Avengers teamed up, the building was Tony’s playground.

When Stark bought the 59-story skyscraper, he also integrated his J.A.R.V.I.S technology—which is basically Alexa on steroids.

The top ten floors of the building were dedicated to research and development, and over the course of the years, Stark perfected his Iron Man suit(s) and developed new technologies, including the Arc Reactor.

This reactor generated enough energy to make the building capable of running itself for over a year—a technology that would really come in handy in the real world too.

The building’s unique sustainability ultimately inspired Loki to deem the tower the perfect location to harness the power of the Tesseract.

After the Battle of New York and the Avengers defeating Loki, the tower, along with the rest of Manhattan, were in ruins. The STARK logo atop the tower was also destroyed, with the letter “A” being the only one intact—what a perfect time for a rebrand!

The Avengers Tower was born. Stark rebuilt the tower, enhanced it, and also added sleeping quarters for each Avenger. After the fall of S.H.I.E.L.D., the Avengers Tower became our heroes’ main headquarters.

Haunted by what happened in New York City, Stark built Ultron, hoping that a machine can protect human kind if something like that happens again. Obviously it backfired, however the tower served as a great location for the Avengers to plan and strategize on how to stop the highly intelligent robot.

Once the whole Ultron thing was put to bed, our guess is Tony realized that maybe the building is just bad juju. He moved the entire Avengers operation to upstate New York, to a state-of-the-art warehouse facility, and later sold the tower altogether.

Either way, the tower served as a key location and will always remain an iconic structure in the Marvel Universe, just like Tony Stark’s house in the standalone movies. Plus, we’re pretty sure we’ll get to see it again in future movies.

Can you visit the Avengers Tower in real life?

The answer is yes… ish. The real-life Avengers Tower is actually the MetLife building at 200 Park Avenue in Midtown Manhattan.

The 59-story MetLife building was built in 1963 and it was designed in the International style by Emery Roth & Sons, Pietro Belluschi and Walter Gropius. The Metropolitan Life Insurance Company (MetLife) acquired the building in 1981 and used it as their HQ.

The iconic building is worth a visit even if you are not a big Avengers fan, and if you are, just by seeing the building live, you can close your eyes and imagine some MCU character will casually walk out and greet you—but hopefully not Ultron.

Alternatively, you could go to Vietnam and visit the Bitex Financial Tower in Ho Chi Minh City, which looks almost identical to the MCU Stark Tower. Or, you can fire up Marvel’s Spider-Man on the PlayStation 4 and visit the tower (and climb it) there.

The Ever-Changing Vision Residence: Magical Interiors Through the Decades
Does the X-Mansion — Charles Xavier’s Ancestral Home — from X-Men Exist in Real Life?
Bruce Wayne’s Manor in Nolan’s Dark Knight Trilogy is a Palatial Estate Fit For Gotham’s Prodigal Son
John Wick’s House is Real – And Just as Complex as Our Favorite Badass Character 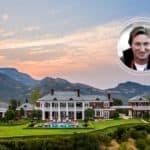 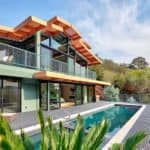