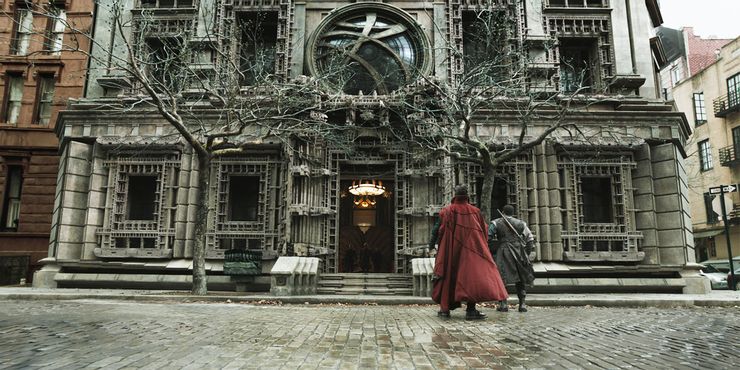 Since the Marvel Cinematic Universe first graced our screens in 2008, fans have, well, marveled at some of the incredible structures our favorite heroes call home.

And, though we would give our left vibranium arm for Tony Stark’s futuristic Malibu house, the ever-changing Vision residence, or even Clint Barton’s sprawling Missouri farmhouse, there’s one home we’ve been truly captivated by for years now.

That is, of course, the Sanctum Sanctorum inhabited by none other than the sorcerer supreme himself, Doctor Stephen Strange… and Wong.

The New York townhouse — fictionally located at 177a Bleecker Street — is one of the most vital locations in all of the MCU and makes an appearance in many movies, not only those led by its former surgeon owner. Strange’s house is also featured in Thor: Ragnarok, Avengers: Infinity War, and the upcoming Spiderman: No Way Home.

A building linked to others across the world (including in London and Hong Kong) Doctor Strange’s house is an remarkable combination of modern New York architecture and mystical innovation. Which means we simply had to look it up!

Where the magic happens

Unlike the Victorian style, three-story brownstone we see in the comics, Doctor Strange’s home in the movie is much more imposing in both its interior style and exterior makeup.

It also appears much larger if its winding corridors and seemingly endless supply of bedrooms, libraries, and protective vaults are anything to go by.

From outside it’s unmistakable thanks to the famous, circular Anomaly Rue window. Also called the Window Of The Worlds, it protects the Sanctum from the threat of supernatural invasions.

Inside the home, however, is where things get really exciting! The interiors created for the Sanctum Sanctorum were purposely designed and built using a huge range of architectural styles from Regency to Art Deco and even a little modern gothic twist thrown in for good measure.

It features dramatic dark wood floors and walls throughout, a towering central staircase, and gets its warm glow from sporadically placed bronze wall sconces and leaded glass windows. What’s more, it’s littered with historical antiques, magical artifacts, and the most beautiful ancient tapestries.

This intriguing blend of décor elements makes for a mysteriously eclectic style not rooted in any particular time period. Perfect for a home full of otherworldly magic with a long and somewhat ambiguous history!

But is the Sanctum Sanctorum real?

It’ll probably come as no surprise that Doctor Strange’s enormous mansion doesn’t actually exist in real life (not in this reality anyway!) and is instead made up of a series of sound stages built at the Longcross Studios in Surrey, UK.

That said, these sets and many other elements of the home were built with such detail and integrity you could certainly be fooled into thinking the action takes place inside a real house. The Anomaly Rue window alone, for example, measured an incredible 14 feet across and took four months to make!

In fact, the production design on this film was so extensive, they even created and built two entire streets. One a 570-foot long Hong Kong street complete with fully functioning storefronts and over 80 neon signs, the other, an exact replica of an entire Nepali back road complete with earthy terracotta and ochre exteriors, dusty walkways, and a distinct smell of incense.

Much like the Sanctorum itself, we have a hard time convincing ourselves that these places we see on screen are merely sets!

How did the Sanctum magically transform?

Now, as Strange’s home gets literally turned on its head during his epic fight scene with Kaecilius, you’d be forgiven for thinking every scene was achieved through the use of Visual Effects.

Interestingly enough, that often wasn’t the case. To make those enthralling moments during which the characters, namely Strange himself, get thrown around twisting and bouncing from wall to wall possible, huge corridor sets were built on gimbal mechanisms allowing for full 360-degree spins. This combined with walls made of rubber meant actors could happily fall from place to place without injuring themselves.

Meanwhile, to make the outside shots look as true to life as possible, the crew took to the real streets of Manhattan to ensure their authenticity.

That said, the scenes on ‘Bleecker Street’ were actually filmed on 12th Street (on the southeast corner of West 4th street to be precise) but still, they were in Greenwich village nonetheless!

Why Bleecker Street? The origin of Doctor Strange’s address in Manhattan

Seeing as Doctor Strange’s Mansion won’t actually be found at 177a Bleecker Street, you might be questioning why this particular address was chosen for him. Let me tell you, the answer is incredibly cool.

Back in the ’60s, Marvel writers Roy Thomas and Gary Friedrich shared an apartment located at, you guessed it, 177a Bleecker Street.

Wanting to ground the hero’s house somewhat in reality, they decided to make Strange’s fictional home stand in the very place they resided together.

If only we could get our hands on the Eye of Agamotto, we’d reverse time and ask them to sign the deeds on that incredible (albeit fictional) mansion over to us instead!

Placing the Avengers Tower on the NYC Skyline: The Real Building that Stands in its Place
You Can Book Tony Stark’s ‘Avengers: Endgame’ Cabin on Airbnb for $1,000/Night
Is it Real? Tony Stark’s Insane Malibu Mansion in the Iron Man Movies
The Ever-Changing Vision Residence: Magical Interiors Through the Decades 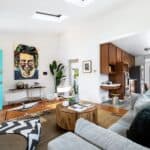 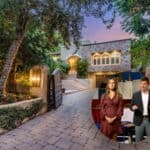