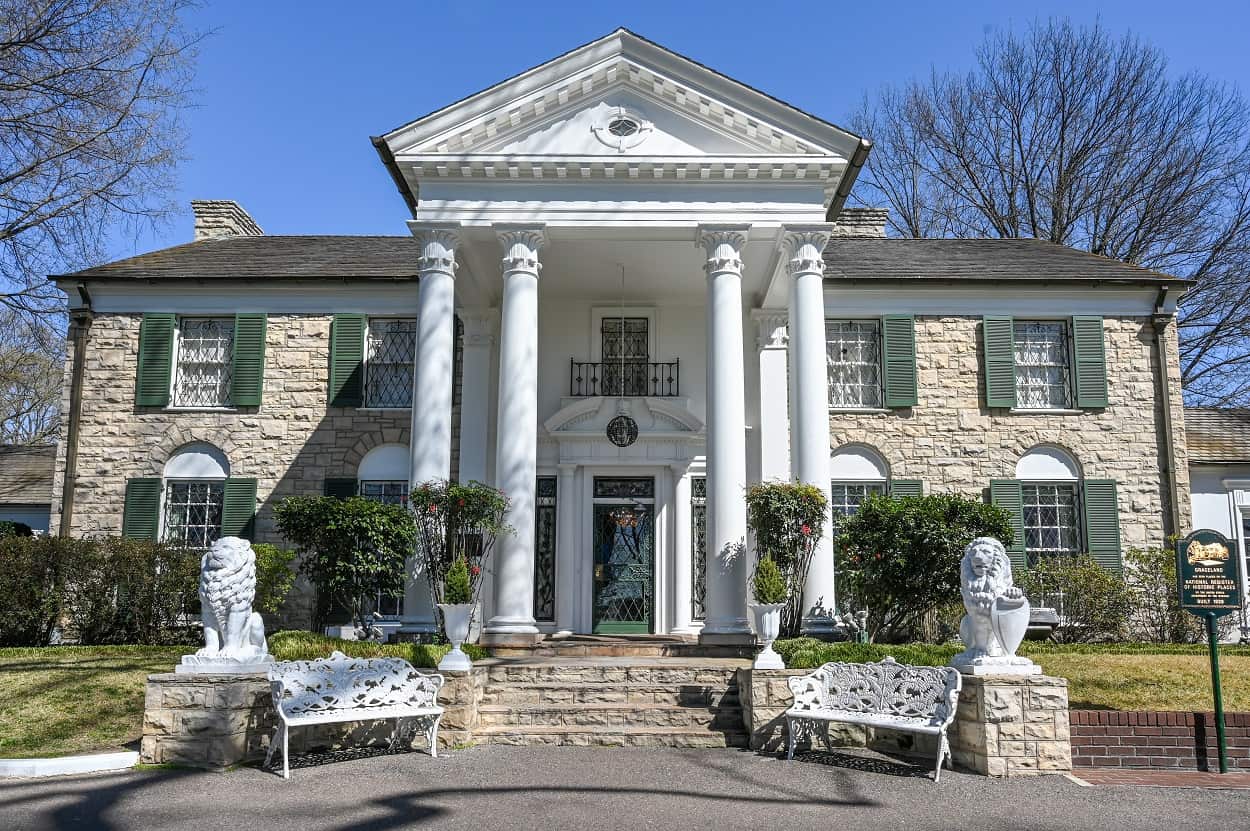 Ranked as the most-visited privately owned home in the United States, Graceland attracts 650,000 visitors a year.

Rivaling some of the most famous homes in the entire country, such as the Biltmore Estate in North Carolina, Hearst Castle in California, and the White House in Washington, D.C., Graceland is a stately 13.8-acre estate in Memphis, Tennessee.

Graceland was owned by none other than rock ‘n roll superstar Elvis Presley. The King’s only child, Lisa Marie Presley, inherited the grand estate after his death in 1977.

Now a bucket-list destination for millions of Elvis Presley fans around the world, the 1939-built mansion houses an incredible collection of mementos that tell the story of Elvis’s career and personal life.

Located nine miles south of central Memphis in the Whitehaven neighborhood, Graceland is now a museum open to the public and has been declared a National Historic Landmark.

All shook up you’ve never been?

We won’t be cruel! Let’s put on our blue suede shoes and walk through the experience of Elvis’s Graceland.

From when Elvis bought it, to who owned it before, to what it’s worth now, you’ll see why the King couldn’t help falling in love. So let’s shake, rattle and roll our way inside the famous Presley family estate.

Who owned it before Elvis? And why is it called Graceland?

Before the King took up residence in the treasured Tennessee estate, Graceland was owned by Stephen C. Toof, founder of S.C. Toof & Co., the oldest commercial printing firm in Memphis.

While the mansion was built in 1939, the grounds were named after Toof’s daughter Grace, who inherited the land from her father in 1894.

When Grace died, the property was passed down to her niece Ruth Moore, a Memphis socialite.

In 1939, Ruth and her husband Thomas Moore built a 10,266-square-foot Colonial Revival style mansion designed by architects Furbringer and Ehrman.

The stately mansion would be called none other than Graceland, in honor of the late aunt who passed down the property.

After living in the mansion for 18 years, the Moores left the building. They sold the estate to a (rather famous) home-buyer looking for a remote Memphis mansion.

As the story goes, Elvis asked his parents Vernon and Gladys Presley to find a “farmhouse”- like property to purchase. The King was beginning to rise in his fame, and his modest house in central Memphis was becoming a hub for fans and journalists.

Not the ideal place to hang a pair of blue suede shoes!

So he gave his parents a budget of $100,000 to find the perfect remote property. At that time, Graceland was located in southern Shelby County which was considered way outside Memphis’ main urban center.

And it was the perfect fit for the King.

Who has lived at Graceland?

Just one year after setting up residence at Graceland, Elvis’ mother died in 1958 at the age of 46. His father remarried in 1960 to Dee Stanley, both of whom lived at Graceland for a while.

But Elvis still loved his mother tender and true, and when family politics got a little too complicated, Vernon, Dee and her three children relocated to a house alongside the estate.

On May 1, 1967, Elvis married Priscilla Beaulieu who lived at Graceland with her new hubby for five years. The couple’s daughter Lisa Marie was born on February 1, 1968, and spent the first years of her life on the estate until her parents divorced in 1972.

How long did Elvis live at Graceland? And is he buried there?

The pop superstar officially left the building on the day of his untimely death, August 16, 1977.

With the cause of death cited as cardiac arrhythmia, Elvis took his last breath at the tender age of 42 while at Graceland.

On August 18th, a private funeral was held at Graceland with the casket placed in front of the stained glass doorway of the music room.

Fans can visit the King’s gravesite at the Meditation Garden, located at Graceland. As well, Elvis’ parents and his grandmother Minnie Mae Presley are also buried in the same garden, which is located next to the mansion.

Fans can  also pay their respects at the memorial gravestone for the King’s stillborn twin brother, Jesse Garon, also at the site.

What happened to Graceland after Elvis’ death?

After his death, Elvis’ father Vernon served as executor of his estate. When Vernon died two years later, Priscilla was chosen to serve as the estate executor for Elvis’ only child, Lisa Marie, who was 11 years old.

As it turns out, running Elvis’s Graceland required a fortune.

Just to upkeep the estate every year, it cost $500,000 (not to mention the taxes which were more than the yearly upkeep), and since Lisa Marie’s inheritance was a mere $1 million, Priscilla had to come up with Plan B.

Every bit the smart businesswoman, Priscilla sought out the help of Jack Soden, a CEO who was well-versed in running famous houses/ museums.

And their brilliant minds made for a mind-blowing moneymaker.

When Graceland was opened to the public on June 7, 1982, the estate made back all the money it had invested in the first month alone.

Priscilla then became the chairwoman and president of Elvis Presley Enterprises, a.k.a. EPE, until Lisa Marie reached adulthood.

What is Graceland worth today?

On her 25th birthday in 1993, Lisa Marie inherited Graceland, which had grown to an estimated $100 million due to its profitability.

As the only heir to her famous father’s legacy, Lisa Marie became more closely involved with EPE, of which she was owner and Chairman of the Board until February 2005 when she sold a major interest in the company.

Since opening to the public, Graceland has hosted more than 20 million visitors and brings in $10 million annually.

Does anyone live at Graceland now?

Lisa Marie Presley retains 100% sole personal ownership of Graceland Mansion itself and its over 13-acre original grounds. As well, she is the owner of her famous father’s personal belongings — costumes, wardrobe, awards, furniture, cars, etc.

As the sole owner, Lisa Marie has made the mansion and Elvis’ belongings permanently available for tours of Graceland and for use in all of EPE’s operations.

“I was born in Memphis and it was my home,” Lisa Marie shared with NBC.

The only child of Elvis is proud to keep her famous father’s memory alive at Graceland.

And when visiting hours are over, Lisa Marie has been known to take off her blue suede shoes for awhile.

“It shuts down quite nice at night,” Lisa Marie said. “I have family that I love very much who live there in Memphis. When I go to Memphis, I visit (Graceland). We have dinner there.”

She added: “I’m usually there after hours, typically, but occasionally while tours are happening.”

But does she stay overnight?

“I have stayed there in the past,” she admitted, “but not recently, no.”

What Happened to Michael Jackson’s house, Neverland Ranch?
The Iconic Beverly House: where Jackie O & JFK Honeymooned, ‘The Bodyguard’ was Filmed, and where Beyonce Shot ‘Black is King’
The Playboy Mansion: Hugh Hefner’s House is Now Part of Modern History
The Complete History of The Spelling Manor, Now Back on the Market Asking $165 Million 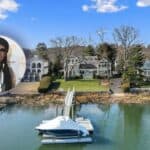