Despite its grim history, the Miami Beach mansion that was once owned by Italian fashion designer Gianni Versace hasn’t lost its appeal, still drawing crowds of tourists each year.

In fact, people stop here every day to pose for pictures in front of the home where Versace was fatally shot by Andrew Cunanan in 1997 — making it one of the most photographed homes in America.

But the story of the Versace mansion goes back almost a century, long before its illustrious owner took residence here.

And some parts of it are far more interesting than the gruesome murder tales it’s been reduced to over the years.

The history of the Versace mansion, now known as Casa Casuarina

It was commissioned in 1930 by architect, author, and philanthropist Alden Freeman, who was also the heir to the Standard Oil fortune.

Alden Freeman modeled the mansion after the oldest house in the western hemisphere, the “Alcazar de Colon” in Santo Domingo — built in 1510 by Diego Columbus, the son of explorer Christopher Columbus.

Freeman actually incorporated brick from this ancient house in the construction of Casa Casuarina.

When Freeman died in 1937, the property was purchased by a man called Jacques Amsterdam.

It was renamed “The Amsterdam Palace” and turned into a 30-unit apartment building that attracted many local artists with its unique design.

How Gianni Versace fell in love with the Miami Beach mansion

As the story goes, Versace was passing through town on his way to Cuba when he asked a cab driver to show him something “fancy and fun” about Miami.

When the cab driver took him to South Beach, Versace first laid eyes on the villa-turned-eccentric-apartment-building, and he just had to have it. According to sister Donatella Versace:

But Gianni Versace didn’t let that intimidate him, and bought the house in 1992, spending more than $32 million to turn the rundown apartment building into the opulent mansion that would serve as his home from 1992 until his death in 1997.

As part of an extensive three-year remodel, the 24 apartments became 10 spacious suites.

He also added a 6,100-square-foot wing and a 54-foot-long mosaic-tiled pool that was inspired by his Marine Vanuras collection and made up of more than one million mosaic tiles.

Thousands of those mosaic tiles are real 24-karat gold.

In an ironic twist of fate, Gianni Versace was gunned down five years later on the front steps of his beloved Ocean Drive mansion.

In the 20 years since Gianni Versace’s death, Villa Casa Casuarina has had a troubled course.

Donatella Versace sold the property three years after the murder and it changed hands several more times, eventually becoming a hotel owned by the Nakash family, founders of the Jordache clothing/jeans brand.

They paid $41.5 million for it at an auction in 2013, beating a bid made by former President Donald Trump.

Visitors can swim in the pool he lined with 24-karat gold tiles, sleep on double-king-sized beds so large they require custom-made sheets, gaze at the ocean from his rooftop observatory and dine in a gourmet restaurant opened in the fashion designer’s former dining room.

All that luxury doesn’t come cheap.

It’ll cost you upwards of $1,000 to spend a night in the Versace mansion. And if you feel like splurging even more, you can even sleep in Gianni Versace’s former bedroom.

Having dinner at the Versace mansion will also cost you a pretty penny. A meal at Gianni’s costs $195 / person, plus tax and service charge.

You can book your stay here; or, if you find the daily rates at the former celebrity mansion to be out of reach, there are plenty of vacation rentals and hotels nearby.

Here are some of your top choices in the area:

Since the former single-family home now operates as a boutique hotel, nobody actually lives inside the Versace house anymore.

But fans of Ryan Murphy’s American Crime Story series would never have been able to tell, as the Versace house briefly returned to its past glory to serve as filming location for the thrilling FX show.

Back in the spotlight: the real Versace house was featured in ‘American Crime Story: The Assassination of Gianni Versace’

In the second season of American Crime Story, FX made the world turn its eyes to Miami Beach and a very grim part of its history: the assassination of Gianni Versace.

The hit series explored the assassination of Gianni Versace, who was gunned down right on the front steps of his Ocean Drive mansion in 1997.

The death of the iconic Italian fashion designer stunned South Beach and sent police scrambling to find the murderer.

And while a big part of the series was filmed in California in 2016, when it comes to scenes filmed in and around the house, those were all shot on the actual property once owned by Gianni Versace:

The Sharon Tate Murder House on Cielo Drive and Its Sordid Past
The Story of Taylor Swift’s Holiday House — Home to “the Last Great American Dynasty”
The Most Expensive Celebrity Homes in Recent History: Top 10 Priciest Pads
Spotlight On: Graceland, Elvis Presley’s House in Memphis 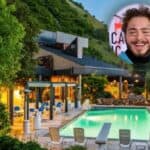 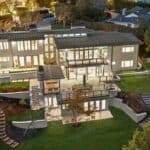