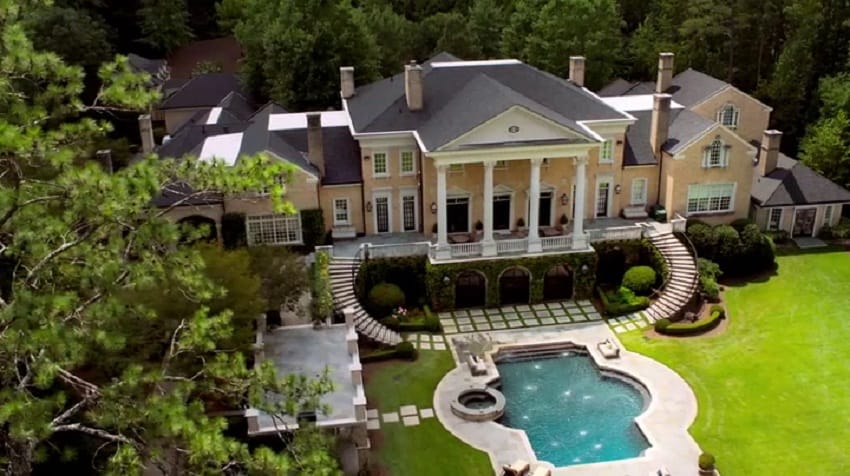 While less apparent to the rest of us, struggling mortals, there are quite a few degrees of richness out there. But none can quite match the level of wealth and opulence portrayed in The CW’s remake of Dynasty, which intentionally gives us a peak into the extravagant lives of the 1%.

A tribute to the classic 1980s soap opera with the same name, the show follows the family of oil baron Blake Carrington as they navigate a world full of mischief, intrigues, and over-the-top luxury.

And no car, piece of jewelry, or extravagant party better shines a light on the outrageous wealth of the family than the home they live in, Carrington Manor — a 16-bedroom mansion fit for modern-day royalty (or dynasty, if you prefer).

So we thought we’d go searching for the real-life Dynasty mansion, see if it exists outside of a filming set and where fans of the show might find it.

The story of the fictional Carrington Manor

Said to be located at 3673 Riverly Road N.W. in Atlanta, GA, the mansion in the Dynasty reboot moves the Carrington family out of Denver, CO — where the action of the original show took place — to the outskirts of Atlanta.

The opulent home appears to be loosely based on the home of the initial show’s creator, Aaron Spelling, famous for building one of the biggest homes in Los Angeles for his family, which he dubbed The Manor.

While Dynasty fans will be quick to spot the similarities between the two residences (especially when it comes to the lavish iron staircase), the major difference is that the Spelling Manor has a total of 123 rooms, while its screen counterparts has only been allotted 16 bedrooms.

But don’t let that fool you into thinking the Dynasty mansion is any less impressive.

As leading character, Fallon Carrington points out during the first few episodes, the home of the Carringtons spans 341 acres, on land previously owned by the family of the show’s matriarch figure, Alexis.

In fact, the loft previously occupied by Michael Culhane (which later becomes Alexis’ residence) was erected on the spot where her family home once stood.

The property, along with the house and separate loft above the stables were given to Alexis and Blake as a wedding gift by Blake’s father, Thomas Carrington — who, in rich people fashion, never transferred the deed to their name for tax purposes, which naturally led to a battle for ownership rights following Thomas’ untimely demise in the first season of the show.

The manor serves as a key location in the show, with most of the action in Dynasty taking place here.

And while the indoor shots are mostly filmed in a studio set, die-hard fans will be happy to learn that the outdoor scenes all take place on the grounds of a real-life mansion set in Buford, Georgia.

Ever growing in popularity as a filming location, Georgia is now the go-to setting for many fan-favorite shows streaming on Netflix, including Ozark, Love is Blind, Raising Dion or Sweet Magnolias.

Which made it a natural choice as the setting of the glamorous reboot, whose action (or drama, to be more accurate) takes place in the city of Atlanta.

The house featured on the show as Carrington Manor is located on 5726 Kennedy Road, in Buford, Georgia, some 30 miles away from Atlanta. The mansion was used for the establishing shots, as well as all of the outdoor scenes in the series.

Fun fact: a different mansion — located at 4110 Paces Ferry Road in Atlanta — was used in the pilot episode. This property had some quite distinctive stairs leading up to the front entrance, which no longer appear in later episodes.

How does the new Dynasty manor stack up against the old one?

If you’re like me, all this talk of Carrington Manor may have made you wonder “what happened to the initial Dynasty house?”

If that’s the case, know that the mansion used in the original show is known as the Arden Villa, and is equally impressive as the current property.

The mansion, in which actresses Linda Evans (who played Kristle Carrington in the 1980s show) and Joan Collins (in the role of Alexis) famously tussled in a lily pond, is located in Pasadena, California. The property sold in 2019 for $15,579,500, after spending several years on the market.

All the Glamorous Penthouses, Suites, and Lofts in Gossip Girl
The Story Behind Carrie Bradshaw’s Apartment in “Sex and the City”
Tony Soprano’s House is a Real-Life Home in NJ — And the Pool and Driveway Look Awfully Familiar
The Dream House Derek Built for Meredith in “Grey’s Anatomy” 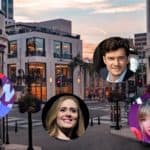 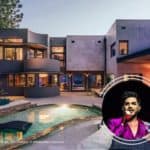