Since everyone watching the new Netflix show, The Stranger, seems to be awestruck by the dream house the Price family lives in, we set out to investigate and find out if A) the house is real and B) if it is equally dreamy in real life.

Turns out, the answer to both questions is a resounding Yes, with just one caveat: you’ll have to travel all the way to Manchester, UK to catch a glimpse of it.

It tells the story of Adam Price — a happily married father of two whose life is turned upside-down after a stranger tells him a secret about his wife, which unleashes a whole series of events.

Yet seeing that a lot of the action in the show takes place in the Price family house, the impressive seven-bedroom family home is as much the star of the show as the famous cast.

The real-life house used in The Stranger

While Harlan Coben’s bestselling novel, which served as inspiration for the series, is set in America, the Netflix adaptation moves the Price family to the fictional town of Cedarfield, said to be in the northern part of the U.K.

For the biggest part, the city of Manchester served as filming grounds for the fictional Cedarfield, with a suburban home acting as the house of the Price family.

That comes as no surprise, given that Netflix often uses the Manchester area to shoot its original series.

The house itself, called Park End House, is located in Didsbury — a suburban area of Manchester, England, on the north bank of the River Mersey, 4.5 miles south of Manchester city center.

Clocking in at 4,500 square feet, the massive abode is located right next to a park, and it just as stunning as the eight-part Netflix series will lead you to believe.

The Manchester house was last listed for sale in 2013 for  £1.45 million, which made it the most expensive home in the area at the time.

On the ground floor of the house, there’s a formal lounge — with its original sash windows — as well as a den. On the second floor of Park End House, just like in the Netflix show, you’ll find a master suite, equipped with a dressing area and en-suite bathroom, a shower room, and two more bedrooms.

The next level houses two more bedrooms, with two extra bedrooms on the uppermost floor, next to the laundry.

If you find the house to be ginormous and that it could fit far more people than your average family, you’re onto something. In real life, the Park End House is so spacious that it once served as a halls of residence for students.

The previous owner told Manchester Evening News that, at one point, the house was accommodating “24 female students and was in a really dreadful state; two dilapidated kitchens, sinks in all the bedrooms, a tree growing out of the back room and a jungle of a garden.”

But that wasn’t going to stop him from taking advantage of the property’s ideal location, gorgeous structure, and intimate backyard.

So he set off to restore the property and invested heavily in renovating the home — to spectacular results that we now get to see thanks to the new Netflix show, The Stranger.

And if all this talk about the house of the Price family got you wondering about the neighbor’s house on the show, know that Adam’s neighbor, Tripp, does live in the house across the street.

Only in real life, that house goes by the name “Pine House” and is a historical building that dates back to the 1840s.

as seen on tvinternationalnetflixTV Series 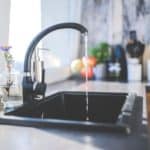