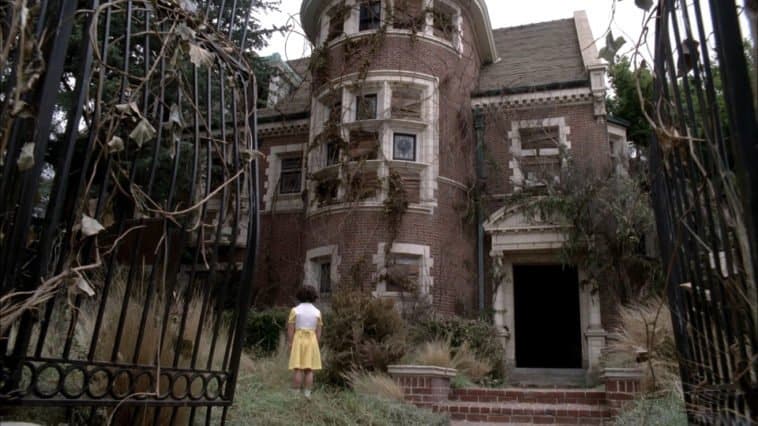 The stately house we’re about to visit today is one that’s strikingly familiar to TV fans that can’t say no to a good horror series.

More commonly known simply as “The Murder House” the otherwise-beautiful property served as the eerie setting of the first season of American Horror Story, a series so successful it nabbed 16 Emmy awards.

The same house made a comeback in the show’s eighth season in Return to the Murder House, and has even made a cameo in American Horror Story: Hotel, when Lady Gaga’s Countess character films a scene here.

Die-hard fans who’ve binged all seasons of American Horror Story admit that one of the most memorable seasons yet has to be the very first with its creepy setting in the spookiest of places — the Harmons’ own home.

That’s why we thought we’d take a closer look at the American Horror Story Murder House, the infamous setting of this much-talked-about FX series.

Join us as we ask and answer the burning question — is it real? And where can we find it in real life?

As the story goes, the property — in the fictional realm — is believed to have been haunted since the 1920s, but the Harmon family move into the beautiful (read: eerie) Murder House oblivious to the sordid secrets that lie within it.

By the time it’s featured again in the show’s eighth season in Return to the Murder House, over 30 people have reportedly died in the house, their angry souls trapped forever within its walls.

Now, casting a house to fill those shoes is quite the task.

Luckily, the great filmmakers behind AHS didn’t let that intimidate them, and found just the right house for the role.

When asked about the location, the show’s creator Brad Falchuk said “This house is just bricks, stone and glass but it’s more than that – it’s got a personality. The moment we saw it, we realized it was going to be the star of the show. I can feel that energy when I walk into that house. There is no [actual] malevolence in there but you can feel its sense of history.”

So tell us, is the American Horror Story murder house real?

Yes, it is! The real-life mansion used for filming the first season of American Horror Story is actually called Rosenheim Mansion and it’s located in Los Angeles, California, in the Arlington Heights area.

It was built in 1910 by architect Alfred Rosenheim, one of the leading Los Angeles architects of the early 20th century.

Rosenheim, who also built the Hellman Building, the Hamburger Department Store, Second Church of Christ Scientist and the Eugene W. Britt House, was a very prominent architect who designed many palatial homes for the city’s wealthy.

He built the mansion located at 1120 Westchester Place as his private residence in Country Club Park (an area then known as “Billionaire’s Row” in its hey-day) and it reportedly took five years to complete.

It was well worth the wait: at the time, Rosenheim Mansion was considered to be “one of the finest homes in Los Angeles.”

Crafted out of Italian brick and expensive woods that range from African Oak to Peruvian Mahogany, the mansion is truly beautiful despite its hair-raising reputation.

Inside, the property looks just like we see on the show, with Tiffany stained and leaded glass, Italian brickwork, Peruvian Mahogany paneling, a cathedral ballroom that was once a chapel with 56′ ceilings, a huge basement, and a world class recording studio.

Fast forward over a century and the Murder House became the location of a modern-day legal battle.

In 2015, the property sold for $3.2 million, a massive price drop from its ambitious initial ask of $17 million. But apparently, the new owners weren’t aware of their new abode’s famous TV past.

Before that, the Tudor-style home had been on and off the market for years, and lending it to serve as filming grounds for the series created by Ryan Murphy and Brad Falchuk must have been a great source of cash flow for the previous owners while they were waiting for a buyer to emerge.

In 2018, the Rosenheim Mansion’s current owners – Doctor Ernst von Schwarts and his wife Angela – sued the previous owners as well as the real estate agents for keeping it quiet that the house had been used to film a very well-televised horror show.

They’ve since come around and embraced the property’s status as a pop culture landmark.

They even opened its “doors” to the public (briefly) on Halloween in 2020, offering virtual tours of the American Horror Story Murder House. A white witch, a vampire expert, a Halloween historian and a real-life exorcist were also part of the virtual event, which lasted 24 hours.

Rosenheim Mansion, the real house on American Horror Story, has its own history of hauntings

Many of the mansion’s memorable features from the long-running series reflect reality. Unfortunately, the hauntings are no exception.

When asked about what the house was like in person, actor Even Peters who played Tate Langdon in the series said:

“It’s terrifying. It’s a real house in L.A. that’s old and creepy and there’s actually a chapel connected to it. The whole atmosphere there is really terrifying. We heard some noises and stuff shooting but that’s to be expected in a three-story house with an attic. It’s just a creepy house, it’s so terrifying, with that wood everywhere. I would never, ever want to live in that house.”

And apparently, the house’s owners agree. US publication Too Fab sat down with owner Angela Oakenfold for an exclusive interview where she admitted that the house is indeed haunted.

Since their very first night in their new home, Angela and her husband started hearing inexplicable sounds, with a huge banging noise waking them up at 1am in the morning.

“It was almost as if the ceiling had just fallen in and then there was this really strange like dragging noise, and it was so loud,” Angela said. “It just woke us both up instantly. And we’re looking at each other, ‘What was it?'”

The loud banging continued through the night, prompting the owners to call the police. Cops inspected the property, but couldn’t find the source of the loud noises.

There were also talks of an apparition that haunts Rosenheim Mansion. And Angela’s husband seems to have made its acquaintance too, he even felt it tap his shoulder.

When describing his experience to his wife, he said “It just floated in front of me. It wasn’t like anything evil. It was just like a shadow, like a mist and he said it was a female and after about five seconds it just sort of evaporated.”

The real life Murder House may have a history of reported hauntings, but no actual murders have taken place between its walls.

Even when a real location is used to film a movie or TV shows, many of the interior scenes are usually shot on a sound stage, as not many homes provide enough space for bulky filming equipment.

But that’s not the case with American Horror Story: Murder House. In fact, the Rosenheim Mansion was used to film both exterior and indoor scenes.

Most of the property’s interiors were kept intact for filming — only the kitchen and the kids’ bedrooms were redecorated for the series.

The rest of the set kept the furniture and décor of the real-life Rosenheim Mansion.

We’re talking the dining room that served as Ben’s office which boasts a gold leaf ceiling with Japanese-style motifs and a semi-circular library with its fireplace and built-in Tiffany glass doors.

Where can you find the house on American Horror Story in real life?

The Rosenheim mansion is located at 1120 Westchester Place in Los Angeles, California. It sits on a 0.69-acre lot in a park-like setting.

The exterior looks much like you see on the show, so if you’re in the area and want to capture a moment in time at the Murder House, you can catch a glimpse of the stately mansion.

That being said, please remember that this is a private residence whose owners value their privacy, so be sure to keep a respectful distance.

While American Horror Story surely got the most press, there’s a host of other TV shows that have been filmed at the Rosenheim Mansion.

Among them, the most popular ones were CSI Miami, an episode of Buffy the Vampire Slayer (Fear Itself, 1999), X-Files, Criminals Minds – sensing a theme here? A comedy/drama called Sex and Death 101 was also filmed here, as well as 2003’s poorly rated comedy, Gold Diggers.

But to us, the Rosenheim Mansion will forever be known as the AHS Murder House. Though who knows what lies ahead for the century-old residence.

Behind the Evil Eyes: The (Real) Story of the Amityville House
Is It Real? The Exorcist House, Fact vs Fiction
The Haunting of Thornewood Castle – Where Stephen King Filmed the Rose Red Miniseries
The Sharon Tate Murder House on Cielo Drive and Its Sordid Past 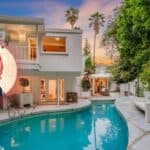 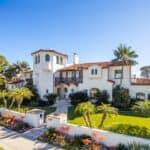