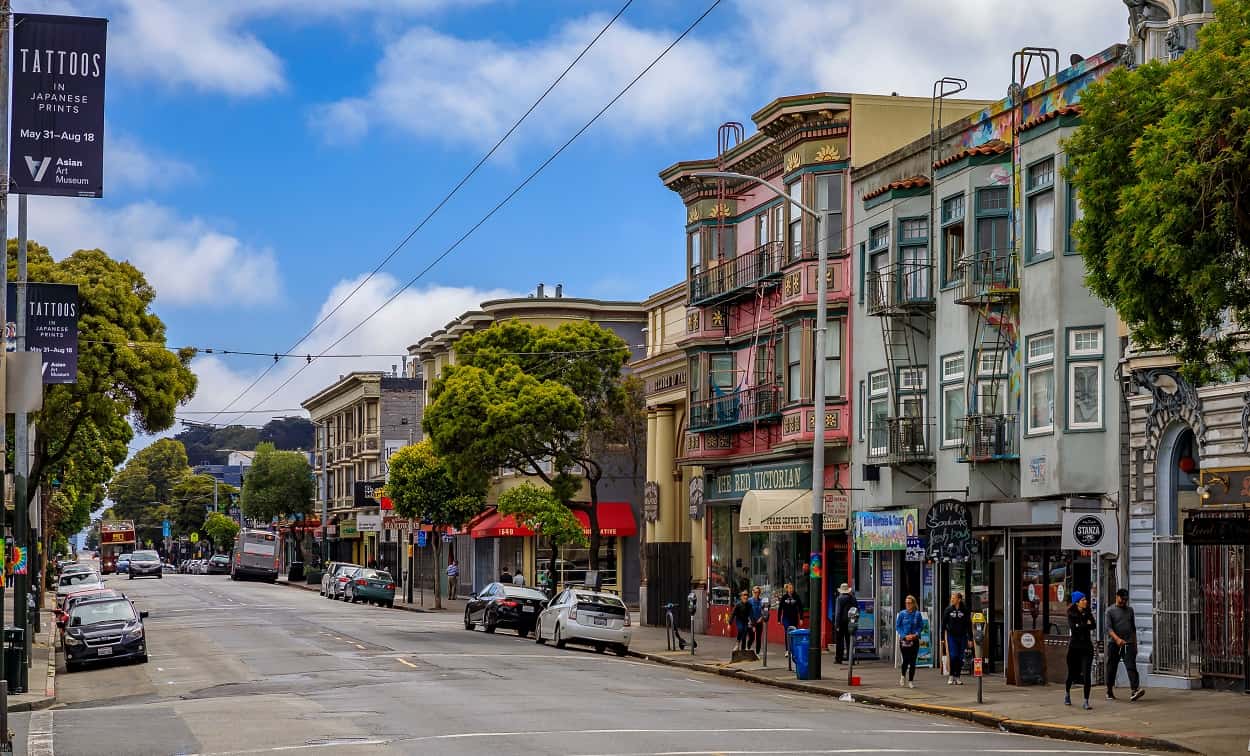 That’s what psychologist and psychedelic-fan Timothy Leary told a crowd of young rebels in San Francisco in 1967.

The legendary ‘Summer of Love’ was just starting in the city, a season of love, peace, music, and naturally, of psychedelic substances.

Why is Haight-Ashbury famous?

At the time, San Francisco, and the Haight-Ashbury neighborhood, in particular, was considered the counterculture Mecca.

Long-haired, bearded hippies from across the country were flocking to the area, almost like pilgrims.

Walking along the streets of Haight-Ashbury, lined with colorful Victorian houses and lots of music stores and head shops, it was not unusual to run into locals like Janis Joplin, Jimi Hendrix, Jerry Garcia, Grace Slick, or even Sid Vicious (who lived in California for a while before his untimely death).

These legendary musicians were at the forefront of the counterculture movement in San Francisco, and most of them resided in the funky houses of Haight-Ashbury.

So what was the appeal of this neighborhood?

Why did so many rebellious teens and adults flock to this area in the late 1960s?

The transformation of Haight-Ashbury into a veritable counterculture Mecca started well before the hippies invaded it.

Named for the intersection of Haight and Ashbury Streets (very original indeed, we know), the neighborhood was definitely not a cool place to hang out before the Summer of Love.

Quite the contrary, it was boring, lifeless, and mostly underpopulated, but that was to change dramatically soon enough.

It all started in the late 1950s when the Beats (which included the likes of Jack Kerouac, Allen Ginsberg, or William S. Burroughs) started to hang out in San Francisco’s North Beach neighborhood.

The high density of talented writers and poets that flocked to the area kickstarted what is known as the San Francisco Renaissance, the precursor to the Summer of Love, if you will.

The only problem was that North Beach was getting expensive, especially for beatnik poets, so many artists of the Beat Generation started moving West towards Haight-Ashbury, which was cheap and mostly vacant.

Haight-Ashbury had become underpopulated because of a proposed freeway that was supposed to pass right through it.

Sometime in the 1950s, local authorities revealed plans for a freeway that would run through the Panhandle.

Luckily, local communities protested against it, and eventually, the plan was scrapped in 1966.

However, many people moved out of the area during the late 1950s and early 1960s, driven away by the potential freeway that would destroy their idyllic life in the Haights.

The neighborhood didn’t remain dormant for too long, however.

Because housing prices were so low, and there were so many abandoned or available properties sitting empty, Haight-Ashbury was the perfect escape for the youth of the counterculture movement.

Rebelling against the government, against war, against their parents, against capitalist society as a whole, teens and young adults moved into the colorful Victorian houses of Haight-Ashbury, paving the way for a historic summer that would firmly establish this unassuming San Francisco neighborhood as the epicenter of the counterculture movement.

The Summer of Love

Once people started moving into Haight-Ashbury, the neighborhood flourished.

Music and art were everywhere, long hair and beards were overflowing, peace signs were plastered across every street and every fringed suede vest, and there was something magical in the air — most likely, weed.

The late 1960s is when everyone discovered marijuana and psychedelic drugs, and in the rebellious hippie community, acid trips were a normal part of the daily routine.

People would go to Haight-Ashbury and get high in various ways; either with psychedelics or getting high on music and art.

Impromptu performances by The Grateful Dead or Janis Joplin with Big Brother and the Holding Company were common, magical moments encapsulated in a thick fog of peace, love, and illicit substances.

Marijuana and LSD were essentials, and you could find head shops on basically every street corner — the first shop in the area, Ron and Jay Thelin’s Psychedelic Shop, opened in January 1966, and quickly became a popular target for locals.

As Haight-Ashbury flourished under the peaceful invasion of young hippies, the musical scene in the U.S. had also started to change.

Psychedelic rock finally entered the mainstream, and musicians like Janis Joplin, Jimi Hendrix, and Jefferson Airplane were getting a lot of radio play and media exposure.

Scott McKenzie’s now-iconic song ‘San Francisco’ mixed the two worlds together, and further established the city as the center of the hippie movement.

Then, in June 1967, local Haight bands got their time in the spotlight at the Monterey International Pop Festival, which gathered names like Janis Joplin, Jefferson Airplane, The Grateful Dead, Jimi Hendrix, The Who, The Animals, Otis Redding, and The Byrds, among others.

It was the biggest event of the summer and a historic musical moment in time.

The popularity of Haight-Ashbury and its hippie scene gained even more momentum after that.

Time Magazine ran a cover story on ‘The Hippies: Philosophy of a Subculture,’ while CBS News featured a TV report on ‘The Hippie Temptation.’

With all the media coverage, radio play, and word-of-mouth, Haight-Ashbury went from boring and underpopulated to lively and overpopulated. It was the beginning of the end.

‘The Death of the Hippie’

The counterculture movement became so popular across the world that people were flocking to the city in astonishing numbers.

Soon enough, the streets of Haight-Ashbury were more crowded than ever, and the neighborhood was unable to accommodate the rapid influx of people.

The scene deteriorated fast, and the neighborhood was soon overcome with homelessness, drug problems, and crime.

Then came autumn, and many carefree rebels left the city to go to college and resume ‘normal adult life.’

Those who were left behind even staged a mock funeral in early October 1967 to commemorate ‘the Death of the Hippie,’ effectively putting an end to the Summer of Love.

The counterculture movement went on for another couple of years; many of the local Haights musicians claimed their way to fame at Woodstock in 1969, which is considered by many to be a bigger, more mainstream version of the Monterey Pop Festival and the peak of the hippie era.

However, this era officially came to a desolate halt in December 1969 at The Altamont Free Concert; four births, four accidental deaths, and one murder took place at the festival.

The days of peace, love, and music were turning into something very different.

In Haight-Ashbury, peace and love quickly turned into crime and poverty, and drug use and homelessness were rampant after 1968.

This led many people to pack up their guitars and move on to greener pastures, putting an end to the carefree hippie days of the neighborhood.

However, the legacy would remain, and the spirit of the counterculture movement would never be erased from the streets of Haight-Ashbury.

If You’re Going to Haight-Ashbury Today

You can check out the infamous Red Victorian Hotel; it was built in 1904 as the Jefferson Hotel and served as a ‘free crash pad house’ during the Summer of Love.

Golden Gate Park, the Haight Street Market, the colorful row of Victorian homes known as the Painted Ladies, the Amoeba record store, and Piedmont Boutique should all be on your must-see list if you’re visiting.

Also make sure to notice the clock at the intersection of Haight and Ashbury streets, which is conveniently perpetually stuck at 4:20 pm.

Who lived in Haight-Ashbury in the ’60s?

If you’re a music fan who grew up listening to Hendrix and Joplin, or a hippie veteran looking to reminisce about the good old carefree days, you can take a tour and visit some of the homes that once housed legendary artists and musicians.

Below is a list of the ones we think are worth taking a look at during your evening stroll.

*That last one might not seem like it belongs on the list, but Charles Manson’s dream (before he became the most notorious bad guy in history) was to be a musician – a famous one, that is.

He wanted to be part of the counterculture scene and hang out with the local Haight musicians, but he was never able to fit in.

Manson even recorded tracks at Beach Boys’ Brian Wilson’s home studio in 1968, but Wilson didn’t think the music was good enough to be released, which angered Manson to no end.

He kept making music even while incarcerated, never able to give up on his dream of being an established, revered musician.

The Haight-Ashbury neighborhood has come a far, far way from the desolate, eerie, and affordable days before the counterculture movement took over.

It’s one of the most popular destinations for nostalgic tourists, who flock to the area every year to get a feel for what it must’ve been like to roam those same streets more than 50 years ago.

It’s also an appealing destination for young people who want to enjoy live music events, a bohemian lifestyle, and busy nightlife, and as a result, 83% of the local population is made up of renters, while just 17% own their own homes.

Median home values are also nowhere near the low numbers of the late 1950s: purchasing a home in Haight-Ashbury will cost you about $1,544,420, according to Niche.com.

So, if you’re going to San Francisco, and Haight-Ashbury in particular, be sure to wear some flowers in your hair and some cash in your pocket.

And if you’re looking for a great place to stay while there, here are some of your best options:

The Bird Streets in Los Angeles: West Hollywood’s Top Celebrity Magnet
What Makes Encino Such a Great Place to Live?
Beverly Park, a Privacy Haven for Hollywood’s Biggest Celebrities
Everything You Need to Know about Brentwood, One of LA’s Most Glamorous Neighborhoods 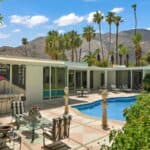 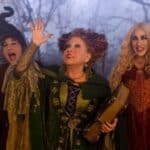